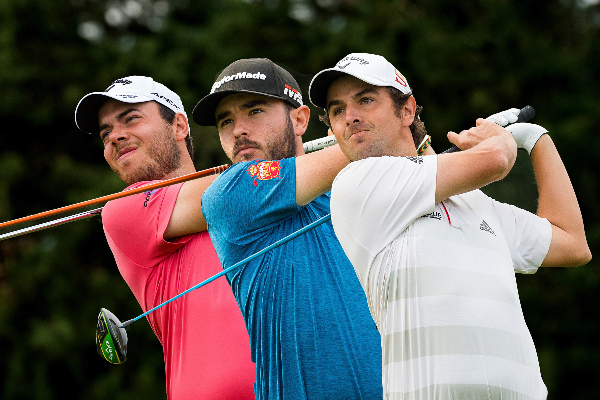 Rome (Italy), October 24, 2019 – The second round of the Alps Tour Grand Final proved to be both exciting and eventful here at the Golf Nazionale. The Italian Edoardo Lipparelli was still on top of the leader board at -7 having carded a 70 today but he was joined by the two Spanish rookies, Angel Hidalgo Portillo and Jordi Garcia Del Moral.

Lipparelli started the front nine strongly with five birdies and just one bogey and at the turn he was -4 (32) for an overall -9. But as he stated: “I started well on the front nine and continued playing well on the back nine, but the putter was not my friend, so I had a couple of three putts”. Two bogeys and pars saw him finish with a 38 coming in for an overall score of -2 (70) for the day.

Angel Hidalgo Portillo started the day in third position at -3 but a round of 6 birdies alongwith 2 bogeys, saw him coming into the clubhouse as joint leader. He admitted to having taken some time to settle into his round: “The first few holes were tough as I felt a little nervous but then by the fourth, I started to feel better. I putted really well today which is what made the difference compared to yesterday.” He totalled a -4 (68) for today’s round.

His compatriot Jordi Garcia Del Moral who started the day at -1 had a fantastic day with a bogey-free -6 (66) for the day: “I had six birdies to shoot six under. A round like today is a real confidence booster.”

Meanwhile David Carey from Ireland, the recent winner of the Cervino Open, roared up the leader board with 7 birdies and not a single bogey to card a -7 (65) for the day to put him in fourth place.

In joint fifth place, at -5 after the two rounds, Frédéric Lacroix from France and Lucas Nemecz from Austria both put in solid performances to move six places up the leader board with –4 (68). They’re joined by Edgar Catherine from France who carded a -2 today including an eagle on the par 5 number 14 hole.

We then have four players in the next spot at -3 for the 36 holes. The Italians, Luca Cianchetti and Federico Maccario alongwith Julien Foret from France and Martin Contini from Argentina.

Despite a brief light shower in the morning, weather conditions were again unseasonably mild. However, a storm is heading in from the South so we can expect heavy downpours overnight which will hopefully have stopped by start of play tomorrow at 8:19.

Play moves to the Terre dei Consoli Golf Club for the next two rounds and the pressure will start to mount as the rounds tick by.