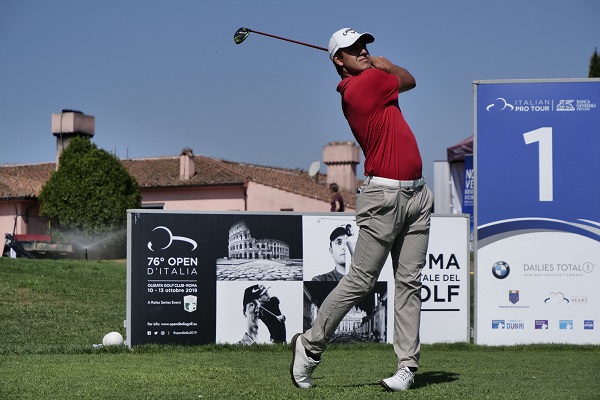 July 25th, 2019 – Rome, Italy – In the Latium countryside at the Golf Nazionale, teeing off from the tenth, Enrico di Nitto from Italy finished the day at the top of the leader board of the Nazionale Open with a -7 (65).

Di Nitto attacked the first nine in style with four birdies and an eagle for a 30 (-6) for his opening salvo.

Enrico: “I started the round really well with three birdies in a row on the first three holes which gave me real motivation for the round”.

Di Nitto struggled a little on the back nine with a bogey on the second hole par 4 then continued with pars before holing two more birdies on the 15th and 16th to card a 35 (-1). However, overall, he was satisfied with his performance:

Enrico: “I played really well today. It would have been nice to hole a couple more putts on the back nine but I’m very happy with my result”.

Di Nitto’s lead keeps him on target for his stated of aim of finishing in the top five at the end of the Alps Tour 2019 season. He is currently fifth on the Order of Merit.

Completing the top ten of Day One are three trios of players.

In second place, two strokes behind at -5 (67) is the French player, Teremoana Beaucousin who also had a front nine 30 (-6). But three bogeys on the back nine ate away at his advantage despite an additional two birdies. Beaucousin has had 5 top ten finishes, in this, his second season on the Alps Tour. Alongside him at -5 is the rookie, Ben Amor from England who carded a 33 (-3) and a 34 (-2).  Joining the two professionals tied for second place is the Italian amateur, Gregorio de Leo.

In the third slot at -4 (68) are two rookies. The Portuguese player, Miguel Gaspar, who will be looking to improve on his top result twelfth place so far this season and move up some precious slots from 53rd on the Order of Merit and Giovanni Cravioli from Italy. Alongside them is the Italian amateur player Andrea Romano.

And rounding off the top ten at -3 (69) are two more Italians, the experienced Federico Maccario, currently 8th on the OofM and the amateur Niccolo’ Agugiaro. The Swiss rookie, Mathias Eggenburger, showing the same fine form he demonstrated at the recent Fred Olsen Alps de Gomera, completes the trio.

Extremely hot weather conditions made the already tough course even more trying for the players with temperatures reaching a high of 36°C. The forecast promises little relief for tomorrow with morning temperatures at 28°C when tee off starts at 7:30 a.m.