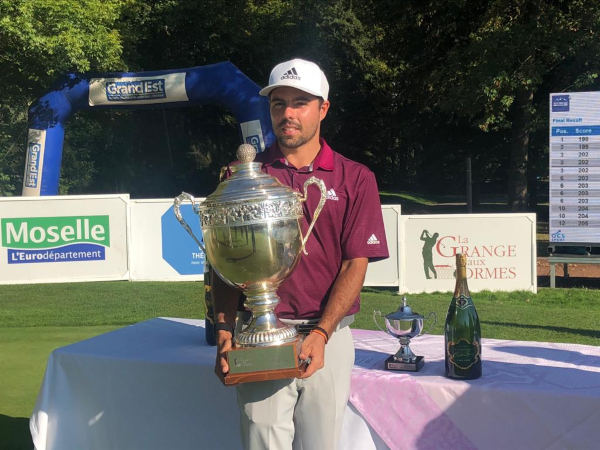 Metz, 13th September 2020 – The battle went right down to the line today between the two Spanish players, Alejandro Del Rey and Lucas Vacarisas here at the Open de la Mirabelle d’Or at the Golf de la Grange des Ormes. But the final putt on the 18th secured victory for Del Rey by just one shot, his first victory since turning professional earlier this year.

Teeing off together at 11:15am, Vacarisas held the advantage after nine holes with three birdies and a -3 (32):

“I started by playing very good golf and although I didn’t hole all my putts, I just tried to stay focussed on my game.”

Del Rey on the other hand did not fare so well going out with just one birdie and two bogeys:

“It was pretty tough. I didn’t play great the first nine holes. I couldn’t hole anything with the putter. I struggled a bit and shot 36 (+1) on the front and wasn’t too happy about it.”

So, on the tenth, the scores stood at -17 for Vascarisas and -13 for Del Rey. Over the next four holes, Vascarisas missed a couple of birdie putts and then bogeyed the 13th. Meanwhile, Del Rey was making his comeback with three birdies and a par to leave them level at -16 teeing up on on the 14th.

Par for both and then Del Rey bogeyed the 15th to go to -15, but Vascarisas followed with an unfortunate double-bogey to fall back to -14 and give Del Rey a one stroke lead. Three holes to go and the two players stayed extremely focussed with three pars for each of them, enough to secure victory for Del Rey  with 198 (-15).

“I played really good, way better than the front so I managed to get a 34 on the back, just barely enough to beat Lucas. I’m happy now but it’s been a stressful day so I tried to stay really focussed and I was still in it when I finished so I didn’t celebrate too much at the end of the 18th but now I’m happy, I’m realising it more.”

Lucas Vacarisas, despite his disappointment showed his sportsmanship and his fighting spirit:

“Congrats to Alejandro for making the putt on the 18th to beat me and we’ll see at the next event.”

“It was a really nice week to get back to being on the top. I’ve been struggling the past couple of months and this is my first cut as a pro, so not a bad way to start the season.”

In joint third place at 202 (-11) it is good to see two rookies: Jeong Weon Ko from France and Matias Calderon from Chile alongside Jonathan Yates from Ireland. Ko, from the Golf de Bussy-Guermantes in the greater Paris region, makes this his third, and best so far, top ten finish of the season. For Calderon, this is his first tournament of the season and marks a good debut. Yates, in his second Alps Tour season, cards up top-ten-finish number two this year and seventh overall.

For the next tournament, the Alps Tour players return to Italy and the beauty of the Tuscany countryside for the Toscana Alps Open from 17th to 20th September at the Golf Club Toscana in Grosseto. The Pro-Am takes place on Wednesday the 16th.