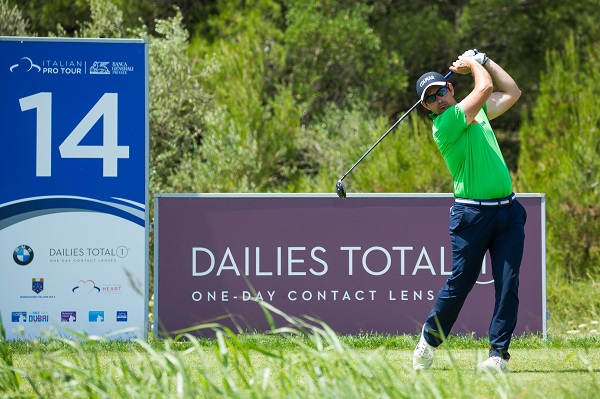 Climatic conditions continued to challenge the players with strong winds and high temperatures, but neither they nor the difficulty of the course got in the way of Molteni. His score card showed par after par interrupted only by 2 eagles and 3 birdies for him to storm into the lead.

Molteni was absolutely delighted about his performance: “I can say it is one of the best rounds of my career, actually probably the best, considering these windy conditions on such a difficult course. I was happy yesterday with my 2 under, but today was really special, the wind was blowing in the opposite direction, from the North, which is considered more difficult. My best shot of the day? I think the second one on the 18th, it was particularly difficult, a 5 iron with lots of wind from left to right, and I hit it 1.5 metres from the hole and then I made the putt. I had other nice shots, but I will remember this one for a long time”.

Molteni started his professional career on the Alps Tour in 2006 collecting 7 top-threes (never a win, though) and is no longer a full-time tour player, having played in only two other Alps Tour tournament this season, Abruzzo Open in April and Memorial Giorgio Bordoni in May, but the motivation is still there as he explains: « I still enjoy playing tournaments from time to time and being in the mix. Of course, I’m getting older and the new generation is very strong, but I can still be in contention”.

He also gave some insight into his course management at the Acaya Golf Club: “This is not a course where you can be very aggressive, you need to stay patient, the course is hard and even more so with the wind. So maybe this could be my advantage against young players! ».

Yesterday’s leader, Pierre Verlaar of the Netherlands is now in joint fourth place with the Italian Edoardo Lipparelli, the recent winner of the Open de Saint Francois in Guadeloupe, both at -6 overall. They’re closely followed at -5 for the two days by the Argentinian Maximiliano Godoy and the Italian Federico Zucchetti.

We can look forward to a closely contested match for the final tomorrow with the weather continuing to be hot and windy at the Acaya Golf Club in Lecce, Italy.