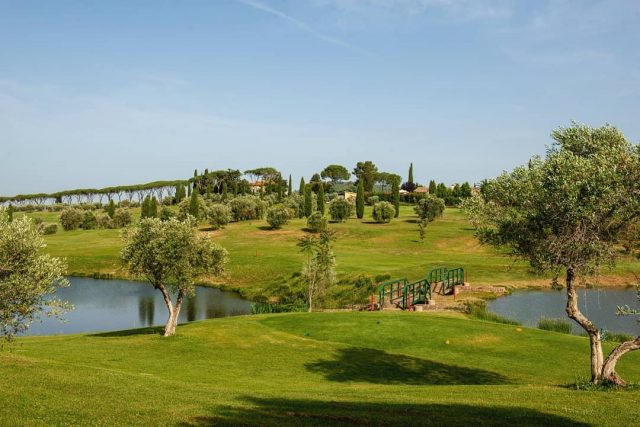 A Welcome Return to Tuscany

Grosseto, 15th September 2020 – The Alps Tour last visited the Golf Club Toscana back in 2011 for the Qualifying School so it is with great pleasure that they return here for the sixth tournament of the 2020 season, the Toscana Alps Open.

Located in the region of Maremma in Southern Tuscany, the par 71, 6249yds / 5714m course designed by Keith Preston, opened in 1999. Set amid vineyards, olive groves, parasol pines and Tuscan cypress trees, the course ranks among one of the most attractive in Italy.

The terrain starts off flat but rapidly becomes undulating to hilly. Whilst not overly long, the numerous water hazards that come into play on at least nine holes can be brutal for wayward shots. The greens are large but sloping with multiple breaks and notoriously hard to read. Out of bounds area lie close to some fairways, with bushes, and dense rough to complicate matters further. A technical course that requires accurate play from tee to green and precise putting to score low.

The signature hole is the 18th, a long par 5, 528 yds/483m. The view from the raised tee box provides a breath-taking panorama, looking out over the Tyrrhenian Sea to the islands of Elba and Corsica.

This is what awaits the 125 players teeing off on Friday. Of the 16 nationalities represented, there are 104 professionals and 21 amateurs. All the top ten on the Order of Merit are present including the winners of the previous five tournaments: the Spanish players, Alejandro Del Rey, last week’s winner of the Open de la Mirabelle d’Or and Jordi Garcia Del Moral, victor at the Cervino Open. The Austrian Lukas Nemecz who triumphed on home territory at the Gösser Open and the winners of the Egyptian Series, Stefano Mazzoli from Italy for the Red Sea Little Venice Open and from the Netherlands, Lars Keunen for the Ein Bay Open.

Among the 51 strong Italian field, we notably have the presence of Matteo Manasseo who currently plays on the European Tour. He was the youngest winner of the British Amateur Championship in 2009 and the same year, won the silver medal for best amateur in Open Championship. In April 2010 he became the youngest player to make the cut at the Masters Tournament, where he finished in a tie for 36th place – the best performance by a European amateur for 73 years. He turned professional two weeks after his 17th birthday and became the youngest winner in European Tour history with victory in the 2010 Castello Masters. With two more wins at the Maybank Malaysian Open in 2011 and the Barclays Singapore Open in 2012, he became the first teenager to win three times on the European Tour. His fourth win before the age of 20 was at the 2013 BMW PGA Championship.

We also have Emanuele Canonica, a former European Tour player who won the 2005 Johnnie Walker Championship at Gleneagles. A prodigious long-distance hitter, he also won the European Tour Statistics Driving Distance category three years in a row from 1998 to 2000.

So, an interesting field and the weather looks set to be favourable for the duration of the tournament, promising to be hot and sunny, rising to a maximum temperature of 32°C/90°F. Sunscreen could definitely be a good addition to the bag.