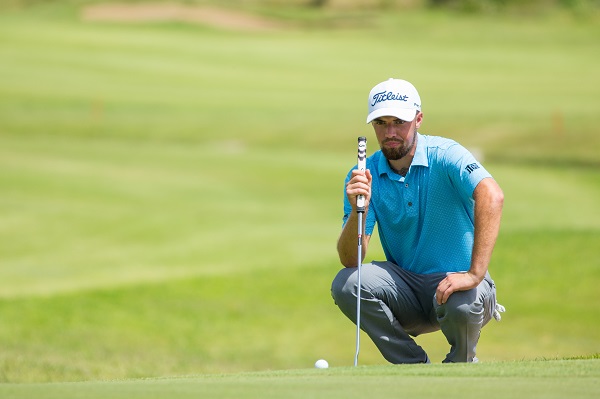 Acaya Open, Pierre Verlaar tops the board at the end of the 1st round

June 13th 2019 – At the end of a scorching day one of the Acaya Open Dailies Total 1 the Dutch rookie Pierre Verlaar is in the lead with a -6 (65), two strokes ahead on the leaderboard.

Verlaar teed off on the first for a promising start: “So 1 was a birdie there and all round the game was good. I hit lots of fairways. Only on three holes I didn’t get a birdie chance. There was lots of birdie chances there and I made quite a lot of them, I made six of them. I missed a couple of short ones as well. But it was a good game today”.

Weather conditions complicated matters as Verlaar underlined “With this wind blowing you really have to get focussed at times”. In addition, the temperatures rose to a high of 33°C during the afternoon with similar conditions expected tomorrow.

Verlaar’s performance is especially satisfying as he is coming back from being injured and as he said, has needed to “rest and then fill the battery up again and play again”. After his excellent round at the Abruzzo Open in April, today’s performance is more than encouraging.

In second place, the experienced English player, James Sharp who will be looking to repeat his 2017 Cervino Open win, had four birdies on the back nine to put him two strokes behind Verlaar -4 (67).

Filling the third slot is a group of 7 players all at -3 (68). The Italians are there in force with four players in the third-place pack including Lorenzo Scalise, the winner of the New Giza Open in March of this year and currently fourth on the Order of Merit. He’s accompanied by two other compatriots Federico Zucchetti and Stefano Pitoni along with experienced player Guglielmo Bravetti.

But Order of Merit leader and hat-trick hunting Sebastian Garcia Rodriguez is also present and finished in style with an eagle 2 on the par 4 ninth. He’s accompanied by another Spanish rookie, Angel Hidalgo Portillo. The Argentinian Maximiliano Godoy, who eagled the par 4 third, completes the tally.

The players at the Acaya Golf Club have enthused about the quality of the course, rating it among the best since the start of the 2019 season. With today’s results it should be the stage for an interesting round 2 tomorrow.