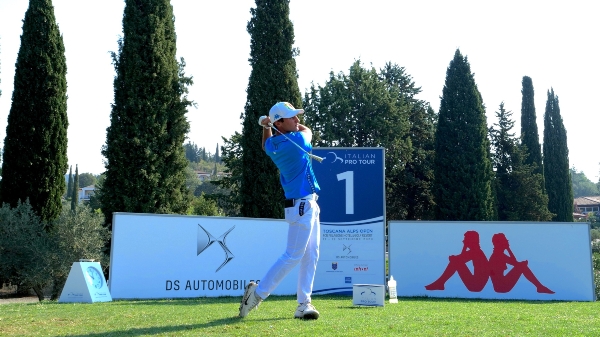 Grosseto, 17th September 2020 – The Italian amateur, Andrea Romano, sits at the top of the leader board by one point after carding a first day -9 (62) here at the Golf Club Toscana.

He started off the 10th with a brilliant two birdies and an eagle followed by a par but then there was a bit of drama. Walking down the 14th fairway he was hit in the chest by a wayward ball:

“It all happened so quickly. I stopped for about ten minutes and then took a pill and carried on. It was hurting all the way round, but I didn’t let it distract me from my game.”

He finished the first nine with a -4 (31) after two bogeys and two birdies but was error-free on the back nine with five birdies for a -5 (31).

Romano played in the European Amateur Team Championship in the Netherlands a week ago:

” It was a nice experience representing Italy in that tournament. We won all our matches in the qualifications but finally finished fourth but were very happy.”

In joint second place at -8 (63) are three players. Xavier Poncelet from France, winner of the 2012 Open de la Mirabelle d’Or and recent victor of the 2020 Arcachon Open, had a terrific outward nine teeing off from the 10th with a -6 (29) featuring four birdies and an eagle on the 15th par 5. Three more birdies and just one bogey saw him at -2 (34) on the inward nine. The other two players went off the 1st; Matteo Manassero from Italy on good form  had a smooth, bogey-free round and eight birdies; and the third member of the trio, Spanish player, Angel Hidalgo Portillo, winner of the Alps Tour 2018 Qualifying School. He had a total of nine birdies but a bogey on the 16th par 3 kept him short of the top of the leader board.

Tied for fifth place at -7 (64) are Manuel Elvira from Spain and Leo Lespinasse from France. Despite a bogey on the 14th par four, Elvira carded a -6 (29) for his outward nine, holing five birdies and finishing with an eagle and then -1 (35) coming in. For Lespinasse, the 2016 winner of the Open de St Francois Guadeloupe, there was not a bogey in sight on his card but seven birdies.

Three players make up the top ten, all at -6 (65). From France, Julien Forêt, would dearly like his first win on the Alps Tour after forty-one top ten finishes. His six birdies and no bogeys get him off to a great start to achieving it. Gregory Molteni had just one bogey alongside his seven birdies. His fellow Italian, Takayuki A Matsui, in his first year as a professional, had 2 bogeys and eight birdies.

We then have six players at -5 (66) and fourteen players at -4 (67). It is early days and with such close scores, anything could happen on day two and the cut.

Tomorrow promises to be another beautiful day in the Tuscany countryside. Play starts at 7:40am from tees one and ten for the morning flights and 12:20pm for the afternoon.