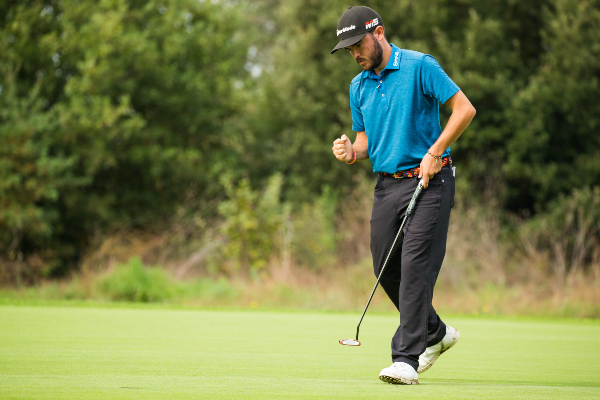 Grosseto, 18th September 2020 – A birdie on the last hole secured the lead position for Angel Hidalgo Portillo here at the Toscana Alps Open. He carded a -6 (65) for the day which put him one shot ahead of the nearest contender.

“It was a good start as I made five birdies in the first six holes, but I had some problems with my driver and putting during this second round. It was very hot but also very windy at certain points on the course.”

He finished the outward nine at -5 (30) with one bogey among his birdies and pars. At this point he was joint leader at -13. The club difficulties he mentioned then caused him two bogeys on the back nine which he compensated for with two birdies to manage to stay at the top of the board. A welcome birdie on the final par 5 made the small but vital difference to put the Spanish player in first place.

In second place at 129 (-13) Matteo Manassero from Italy, teed of this morning in joint second place at -8 and moved into the lead as of hole one with a sweet little birdie on the par four 10th. With three more pars and a bogey-free front nine, he started to head for home at -12. Two more birdies moved him up to -14 but a lone bogey on the 7th par 4 dropped him back a shot but he still entered the clubhouse as leader at this stage.

“Today was good, it was solid, very similar to yesterday to be honest. I came here without expecting much, it was just to see where I was with preparation and with the work I’ve done the last month, so I ‘m happy with the way I played and hoping for a good one again tomorrow.”

In joint third place at 130 (-12) are the Frenchman Leo Lespinasse and the Spaniard Manuel Elvira yesterday’s joint fifth finishers. Both carded -5 (66) for the day with six and five birdies respectively but one bogey for Lespinasse.

Sharing eighth position at 133 (-9) is Tomas Santos Silva from Portugal. He had seven birdies in all, but two bogeys dragged him down. With him is the French player Romain Guillon who played par going out and shot two birdies and an eagle coming in.

At 134 (-8) is a bunch of eight players including yesterday’s leader, the Italian amateur Andrea Romano. His game today was rather a mixed bag ranging from eagle to double bogey to finish with a +1 (72).

The players head out at 7:30am with the leaders’ flight teeing off at 11:07. The sun promises to shine all day but as the day goes on, wind gusts could come into play here at the Golf Club Toscana.