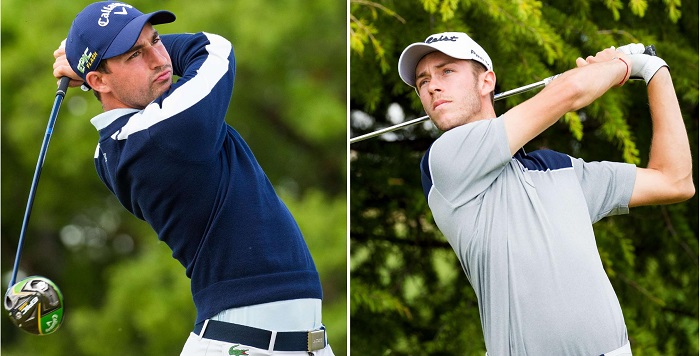 It is a French match on top of the leaderboard : Fred Lacroix (left) and Edgar Catherine lead after 2nd round of Alps de Las Castillas, tied at -19. Photo Tristan Jones
10th May 2019 | Alps Tour Golf

It was birdie-day again at Golf de Valdeluz on the second round of Alps de Las Castillas, the first of the four Alps Tour event hosted in Spain in 2019, a real fireworks show where the best were two young French rookies : Frederic Lacroix, 23, and Edgar Catherine, 20, are sitting on top of the leaderboard at -19 having added respectively a 62 and a 63 to yesterday’s scores, and have a 2-strokes advantage over favourite Spaniard Sebastian Garcia Rodriguez (co-leader in the first round) at -17 and three strokes on Frenchman Xavier Poncelet (co-leader yesterday, too) and Dutch Lars Van Meijel at -16.

« I’ve played well since the beginning – said Lacroix, who won the first tournament he played as a pro in Egypt last February, the Ein Bay Open – on hole 10 I had a birdie holing from 12 metres, and this gave me the right boost for the day; most of the remanining birdies – 8 in total – happened on short par 5s where I could reach the green in two, or par 4s where I was nearly hitting the green with the driver, as it was the case on hole 8 where I actually had an eagle-2 holing from 7 metres. My new driver was the key, I had been struggling lately with my old club so I’ve worked with Callaway in order to find something more suitable for my game and we finally found a solution with a new one that I’m using this week, and it works ! I’m much more relaxed from the tee, I can hit the shots the way I want to, and this makes golf easier for me! And this is the reason why I was confident about a low score, which actually came true».

« My game was a bit less solid than yesterday – said Catherine, who was already co-leading the first round, tied with three other players – but my putting helped me to score well. It was a bit more windy today, the course played slightly more difficult, but I was able to keep my focus and it went quite well in the end ».  On his card, 2 eagles, 6 birdies and one bogey.

Four players shot a 62 (-10) today, apart from Lacroix also Austrian Felix Schulz, Frenchman Julien Foret and Spaniard Angel Hidalgo Portillo, but best score of the day was returned by Spaniard Javier Gallegos Marsal, 61 (-11), who had one eagle, 10 birdies and one single bogey and is now tied 6th at -15.