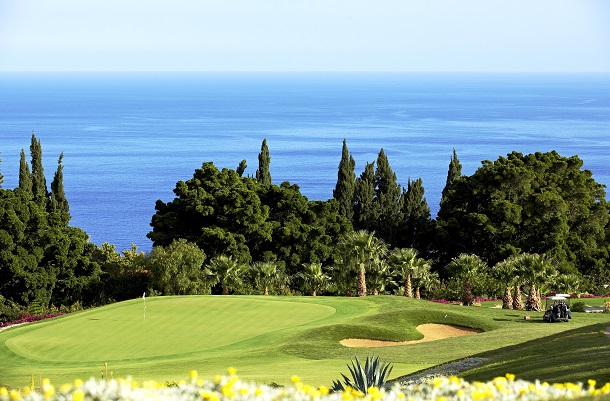 After eight years as a Challenge Tour venue – and some very popular names like Brooks Koepka on its Roll of Honor – from 11th to 13th July Tecina Golf is hosting the Fred Olsen Alps de la Gomera for the second time.
8th July 2019 | Alps Tour Golf

July 8th, 2019 – La Gomera (Canary Islands, Spain) – It is a crucial moment for the Alps Tour players: with only three tournaments to go before the Grand Final, they will have to give their best now to reach their different goals, according to their expectations. It could be getting one of the 6 spots to be admitted directly to Stage 2 of the European Tour Qualifying School (for the top 6 in the ranking as at 21st August 2019); or maybe getting into the top 50 before the Grand Final, so that they can be granted a full Alps Tour category for 2020 and don’t have to go back to our Qualifying School in December – and in order to having a chance to be among the top 50, they need to have played at least 6 tournaments in 3 different countries during the 2019 season; or they might be aiming to the very top, that is, trying to reach the top 5 in the ranking after the Grand Final and gain category 13 in the Challenge Tour.

So, there’s a lot at stake, and Tecina Golf is ready to take the challenge, after hosting a Challenge Tour event for eight years – the Fred Olsen Challenge de Espana from 2009 to 2016 – and a very famous winner, present World Number 1 Brooks Koepka who in 2013 returned a spectacular -24, 10 strokes better than the players on second place, and a few years later would go on claiming 4 Majors.

With Frédéric Lacroix already promoted to the Challenge Tour after his third win of the season, last week in the St. Malo Mixed Open, some of his closest opponents will try to climb up some precious positions or to consolidate their spots, like Austrian Timon Baltl (n. 4 in the ranking) winner of Gosser Open, and Italian Enrico Di Nitto (5th), or Frenchman Xavier Poncelet (8th), Italian Federico Maccario (9th) and Austrian Lukas Nemecz (10th), winner last March in Egypt and eager to go back to Challenge Tour where he competed last year.

Tecina Golf will be the perfect set for this new golfing adventure: located on the hill of Lomada de Tecina, the course overlooks the blue ocean waters. In the words of its designer, leading British architect and writer Donald Steel, it is “the most exciting and challenging project I have ever designed and built. It is unusual because you have to climb up to the first teeing ground, and then it is downhill all the way. The views are amazing”.

The 18 Tecina Golf holes overlooking the sea measure a total of 6,343 metres from the white tees, and it is a par 71 golf course. Fairways and greens are surrounded by a profusion of native Canary Islands vegetation, such as Canary Island spurge cactus and tabaiba shrubs, and trees bearing such fruits as banana, avocado and mango, each giving off its characteristic aroma.