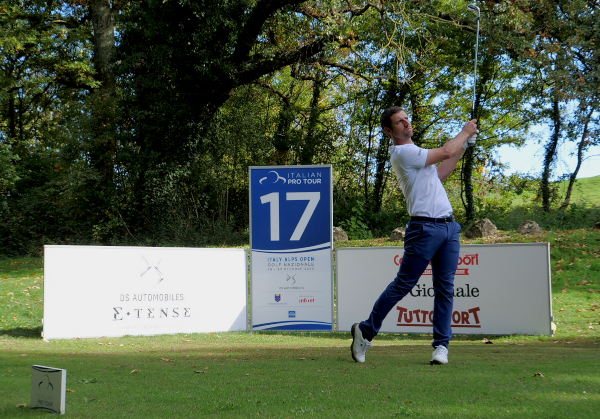 October 29th, 2020 – Rome, Italy – It continued to be a closely fought match at the top of the leader board at the Italy Alps Open with some movement, but the Italian player, Filippo Bergamaschi kept his lead at -10 (134) overall.

With three birdies and a bogey going out and another birdie coming in, Bergamaschi had a 69 (-3) for the day compared to his 65 (-7) the day before:

“My game was pretty clean. I probably didn’t play my best. Yesterday I played a lot better but today was pretty solid and I’m happy with the score. Tomorrow, I’ll try to do the same thing as today and yesterday. Try to keep it in play, hit the greens and hole some putts and just be very steady”.

But still hot on his heels is Jeong Weon Ko from France who kept his second place at -9 (135) albeit now shared with the Italian player, Jacopo Vecchi Fossa. Teeing off around twenty minutes after the leader, Ko opened with a birdie to draw level. However, a bogey on the third cancelled out the advantage and a birdie on the fourth hole for Bergamaschi saw him draw ahead again. Unfortunately, Ko did not repeat his bogey-free round of yesterday totalling two along with five birdies to finish with a 69 (-3).

The joint number two, Jacopo Vecchi Fossa was one of only two players today to card  the best score of 66 (-6), the other being Ryan Lumsden of Scotland lying 28th. Four birdies and an eagle with matching 33 (-3) on each nine. His eagle on the 14th hole par 5 was one of the four made on the course today and saw him climb two places on the leader board.

No move for Jacobo Pastor from Spain, still sitting in fourth position with -8 (136) but on his own today after carding a 67 (-5) with seven birdies and two bogeys.

Julien Foret from France dropped back one place to joint fifth at -7 (137) and is joined by the rookie from Sweden, Oliver Jacobsson. The Swede had an excellent round of 67 (-5) which saw him move up four slots after seven birdies and two bogeys.

The weather forecast says that tomorrow will be a “great day for golf” which is good news for this all-important final round and the three places for Alps Tour members on the Challenge Tour for next season.