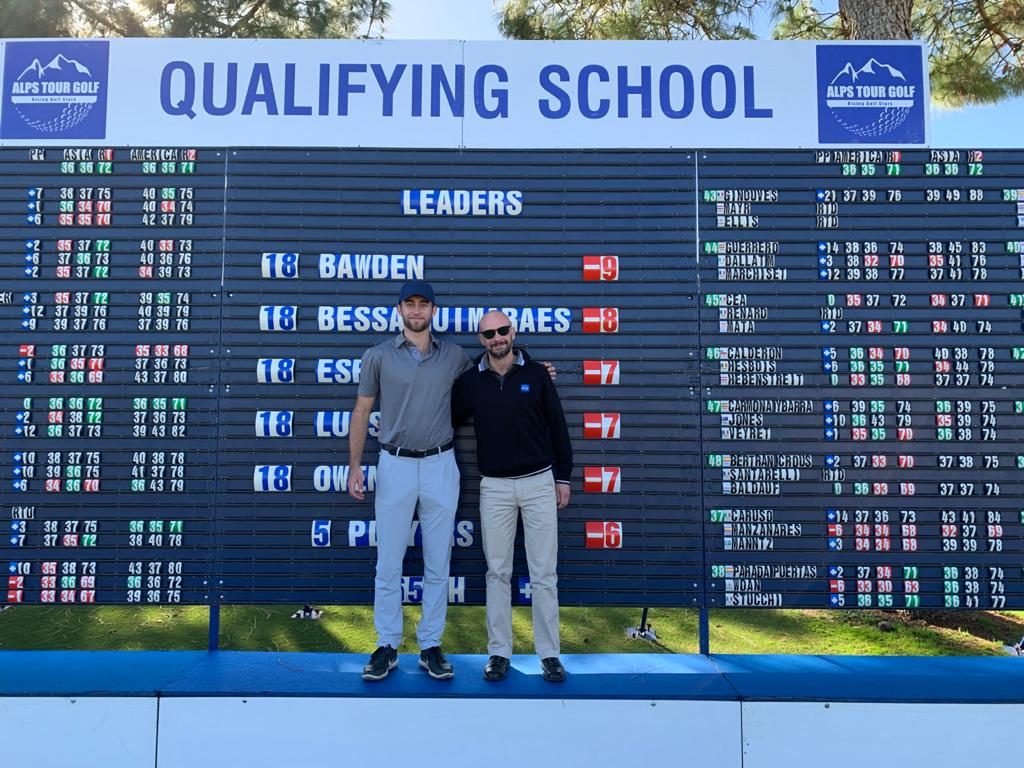 Malaga (Spain), December 22, 2019 – The sun finally returned to the Costa del Sol allowing the players to finish the 36 holes of the Final Stage of the Alps Tour 2019 Qualifying School here at La Cala Resort. And the sun was obviously smiling on Bradley Bawden, the English player from Essex, who held onto his lead from the first round and finished top of the leader-board at -9 (134).

Bawden finished Round 1 at -8 (63) on the America course on Thursday and completed the tournament with a -1 (71) today on the Asia course. He described the fact that it took three days to finish the last round due to the meteorological conditions as “mentally challenging” but explained: “Being from England I’ve got lots of experience with bad weather so its nothing I haven’t seen before. You may get some bad breaks, but you just need to stay positive. Its all about staying strong mentally”.

And Bawden did just that with two birdies and two bogeys on the front nine for a par 36 over the first two days of the round when weather conditions were at their worst and three birdies and 2 bogeys on the back nine today for a -1 (35). His win earns him full membership (category 6) for the 2020 Alps Tour.

Just behind him at -8 (135) for the 2 rounds was the Portuguese player, Tomas Bessa Guimaraes. This was his second Q School having finished 80th last year and having played seven out of the sixteen 2019 Alps Tour tournaments. His final round on the America course started with a +2 (37) as a single and double bogey effectively cancelled out his one birdie of the outward nine. However, he bounded back on the inward nine with three birdies and not a single bogey in sight for a -3 (33).

Three players tied for third position at -6 (137). The former European Tour and Challenge Tour player, Edouard Espana from France, had said his aim was to finish in the top 35 at the Q School. Mission accomplished and we look forward to seeing him back on the Alps Tour in 2020. Alongside him was Ryan Lumsden from Scotland who obviously handled the familiar bad weather conditions with a -4 (67) on the America course for his second round after his -3 (69) on the Asia course. Joining him is the English amateur, Laurie Owen who mirrored his GB compatriot’s results for the two rounds.

Rounding out the top ten finishers were four players tied in sixth position at -6 (137) Daniel Berna Manzanares from Spain, Harrison Woan from England, Augustin Hole from France and Kevin Esteve from Andorra. Whilst at -5 (138) in tenth position were three players, Blaire McKeithen from the USA, Tiago Cruz from Portugal, and Victor Pastor Ruffian from Spain.

The final qualifying score was par (143) with 10 players tied at 32nd place for a total of 41 achieving their full membership for the coming Alps Tour season, of which 32 are professionals and 9 are amateurs.

The official 2020 Alps Tour season kicks off in Egypt with the Winter Series Ein Bay Open from 18th to 20th February followed by the Red Sea Little Venice Open from 23rd to 25th February both at Sokhna Golf Club in Egypt.

Looking forward to another year of great golf from the rising stars on the Alps Tour!