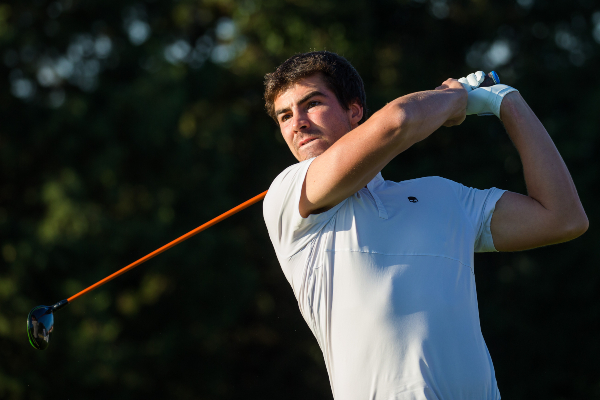 Suez (Egypt), February 23, 2020 – Coming into the clubhouse at the end of the first round of the Red Sea Little Venice Open with a -8 (64), the Italian player, Giulio Castagnara heads the leader board here at Sokhna Golf Club in Egypt.

Castagnara, in his second season on the Alps Tour had a stunning front nine of -5 (31):

“The weather was great. Sunny and just a little wind. Perfect conditions.  I really like the course and was able to get off to a good start with a birdie on the first.”

“I really hit the ball solid. Gave myself a lot of opportunities and then of course made a lot of putts. Today was a great round. I finished ninth at the Ein Bay Open last week which was a good start to the year and nice to see results right away after all the hard work put in over the winter. Hopefully I can keep this up over the next couple of days.”

Right behind him on -7 (65) are three more experienced Alps Tour players. Among them his fellow countryman, Michele Ortolani. He teed off from the 10th and also started with a birdie. He had two more on the outward nine but switched into overdrive at the start of the back nine, scoring 4 birdies in a row and then straight pars to finish.

He’s joined by the Spaniard, Jordi Garcia Del Moral, also off from the 10th tee, who carded four birdies going out plus one bogey but settled into a good rhythm on the inward nine with four more birdies and pars to finish.

Alongside him is Sam Robinson from England who teed off from the first and hit four birdies going out. The back nine saw three more birdies before a lone bogey at the par 4 hole 15. Robinson, however, remedied that with an eagle on the 17th hole par 5.

It looks like being a hard-fought tournament because after the top four on the leader board there is a pack of eight players at -6 (66) and then nine players at -5 (67).

And the eagles were flying today at the Sokhna Golf Club on Courses B & C. Sam Robinson was one of four players to score an eagle on the 17th (Benjamin Grimal, Sebastien Gandon, Jeong Weon Ko). Two other par 5’s, the 7th saw four (Jonathan Yates, Antoine Santarelli, Shaun Jones, Javier Ballesteros) and the 3rd had one eagle (Tomas Santos Silva). Another two were achieved on the par 4 10th (Tomas Bessa Guimaraes, Piers Berrington).

The second round tees off at 7:00 am local time tomorrow from tees 1 and 10. The forecast is for the day to be partly sunny but with the possibility of a couple of showers in the afternoon.