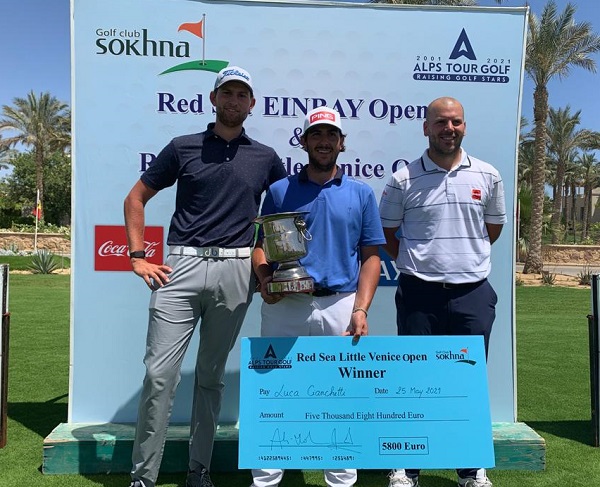 An all-Italian podium: the winner of the 9th edition of the Red Sea Little Venice Open, Luca Cianchetti (holding the trophy and the cheque), between Ludovico Addabbo (left) and Jacopo Vecchi Fossa (right), tied 2nd.
25th May 2021 | Alps Tour Golf

The last round of the 9th edition of the Red Sea Little Venice Open at Sokhna GC, in Egypt, was coloured in green-white-and-red like the Italian flag, when Luca Cianchetti from Modena confirmed his great form of the past two days and finished the tournament at 200 (-16) topping the leader board again and seizing the first prize with a two-strokes margin over fellow compatriots Jacopo Vecchi Fossa and Ludovico Addabbo, tied second at 202 (-14).

With today’s 64 (-8) – best round of the day, signed also by Irishman David Carey – Vecchi Fossa, 26, from Reggio Emilia, climbed seven positions from yesterday’s T9th place and regained the leadership of the Order of Merit that he had briefly conceded last week to Spaniard Angel Hidalgo, now in 2nd spot. Ludovico Addabbo, 22, from Rome, proved to himself he can hold his nerves under pressure and has all the abilities to compete at a higher level, as he started the day as 2nd and in the last group, and never lost his focus, with 4 birdies and just 1 bogey at the turn on hole 10, for a 69 (-3) and a total -14, two strokes better than experienced Frenchman Julien Foret, who dropped two spots and finished 4th at 204 (-12). 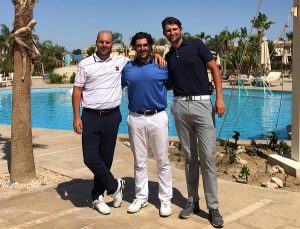 “I am super happy for this win”, said Cianchetti, 25, who can boast two more success in Alps Tour tournaments, the first when still an amateur, in the 2015 Abruzzo Open, and the second in the 2019 Katameya Dunes Open in Cairo. “I didn’t really expect it after the first tournament here where I missed the cut, but after the 62 in the opening round I gained a lot of confidence. It was a difficult day because I was a bit nervous in the beginning and I had a bogey 5 on the 2nd hole and a double bogey 5 on hole n. 4, but little by little I found my focus back and I managed to keep calm and play my game, so I started holing some putts and making some birdies, including four in a row from 11 to 14”. The bogey 5, missing a short putt on the last hole was irrelevant as his margin was already comfortable enough to secure his third Alps Tour title and climbing the Order of Merit up to the 5th place. “Of course I like Egypt, as I already won in Cairo two years ago, and it is a bonus to share the podium here with two other Italian guys who are also friends of mine”.

The Egypt Swing is now in the books. The Alps Tour schedule will resume next month in France with the 18th edition of the Open de La Mirabelle d’Or at Golf de La Grange aux Ormes, in Metz, June 11-13.

Click here for the Final results and here for the updated Order of Merit, or check on the Alps Tour Golf app.