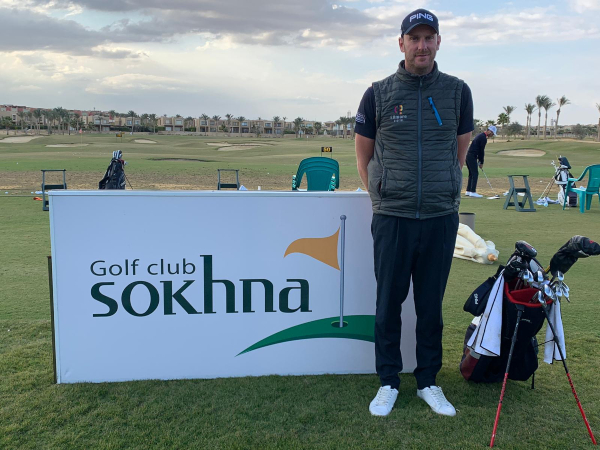 Suez (Egypt), February 24, 2020 – After another round of solid play, the English player, Sam Robinson, moved to the top of the leader board at 130 (-14) after the second round of the Red Sea Little Venice Open at Sokhna Golf Club.

“Two consistent rounds. I pitched it great, chipped it great and putted great. Tee to green perhaps not my best by far but I’ve managed the game well and fortunately hit it in the right place and missed in the right place. It’s fantastic to be back playing again.”

Robinson, an experienced professional golfer, has been absent from the Alps Tour full-time since 2010 which he jokingly referred to as a “ten-year sabbatical”. A back injury and surgery in 2012 along with a new daughter kept him in the UK where he taught and played some tournaments. Back to playing full-time since August 2019, his season is off to a great start with a second position at last week’s Ein Bay Open and then, today’s leader board position.

Robinson teed off from the 10th early this morning and had three birdies going out followed by 5 birdies coming in and just one bogey on his card.

Two shots behind him at 132 (-12) is Jordi Garcia Del Moral from Spain who maintains his second-place position from yesterday’s round. He started today from the 1st tee and birdied the par 4 and followed up with straight pars through hole 6 then another birdie. A bogey on the par 3, 8th was immediately followed by another birdie on the 9th. Three more birdies and pars on the back nine saw him at -5 (67) for the day.

In joint third place at 133 (-11) are Nicolas Platret from France, Mathias Eggenberger from Switzerland, both in their second season on the Alps Tour. They both carded -6 (66) for the day. They are joined by the Italian rookie, Stefano Mazzoli, who had a perfect opening hole when he eagled the par 4, 1st hole and finished with a -5 (67).

The Irishman, Jonathan Yates, and the two French players, Thomas Le Berre and the amateur player, Theo Brizard are in joint sixth place at 134 (-10) after 36 holes. Brizard is the only amateur to have made the cut.

Yesterday’s leader, Giulio Castagnara, slipped back to 137 (-7) but comfortably made the cut at  140 (-4). He was among the 47 players heading into the  last round, of which 46 are professionals and one, an amateur.

Tees 1 and 10 will see the third and final 18 holes tee off at 7:45 am with the last flights leaving at 8:55 am local time. After some probable showers tonight , the weather should be warm and partly cloudy for the conclusion of the tournament.