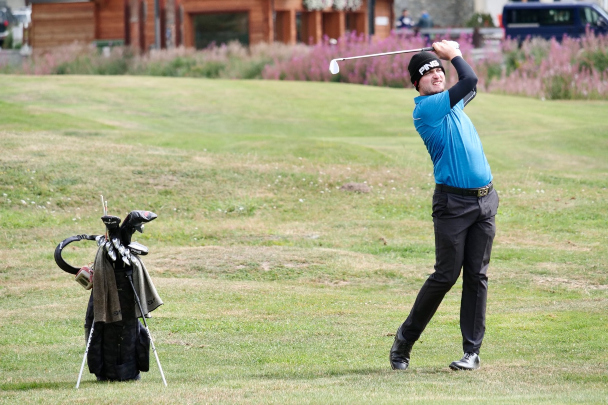 The Irish player, David Carey, held onto the lead with a -12 at the end of the second round. Photo credit: Tristan Jones Photography
6th September 2019 | Alps Tour Golf

Breuil-Cervinia (Italy), September 6, 2019 – Following his record 57 score of yesterday, David Carey finished the day one under par today with a 67 to give him a total of -12 for the 36 holes and to keep him in the lead by two strokes at the Cervino Open.

Low temperatures and rain made for difficult playing conditions out on the course of the Golf Club del Cervino: Carey: “It was cold out there, even for an Irish person!”.

Top of the leaderboard when he headed into the clubhouse mid-afternoon, but second at the end of the day at -10 is the Italian player, Federico Maccario. He had a superb round today with 9 birdies and just a single bogey to give him a 60 (-8) and the lowest round of the day. Maccario: “My short game was very good today. From 120 metres I managed to put all the shots within 3 metres and all the chips close to the pin”.

However, he gave a lot of credit for his result to his caddy. Maccario: “Given the rain and the cold, the most important part of the game was my caddy. He’s been caddying for me for a good number of years and our teamwork out there today was invaluable”.

He also always approaches the course at the Golf Club de Cervino with respect: Maccario “The course, looks short but I never underestimate it because it’s full of traps that can make you make mistakes”.

Edoardo Lipparelli of Italy maintained his position of third place of yesterday on the leaderboard with a 65 (-3) for the day and a -8 for the two days. The winner of the Open de Saint Francois Region Guadeloupe earlier this year had a total of 5 birdies and just 2 bogeys for the day.

In joint fourth place at -7 are the Austrian player Uli Weinhandl, the French player Anthony Renard and Jonathan Yates of Ireland.

Weinhandl carded a 65 (-3) for the day, just one shot over yesterday’s round whilst Renard’s performance finished with a par 68, seven shots more than the previous round. Yates, however, had the second lowest score of the day coming in with a 62 (-6) after 7 birdies and a lone bogey on his card.

At -6, the Italian Luca Cianchetti, winner of the Katameya Dunes Open and the Irish rookie Peter Dallat remain in the top ten of the leaderboard joined by Andrew Scrimshaw from England and Nicolas Platret from France.

47 players made the cut at level par 136 for the two days, 42 professionals and 5 amateurs.

Weather conditions for tomorrow show a slight improvement with no rain forecast but it still promises to be cold as the players head into the final round with the first tee off at 7:30 am and the last flight out at 10:15 am.