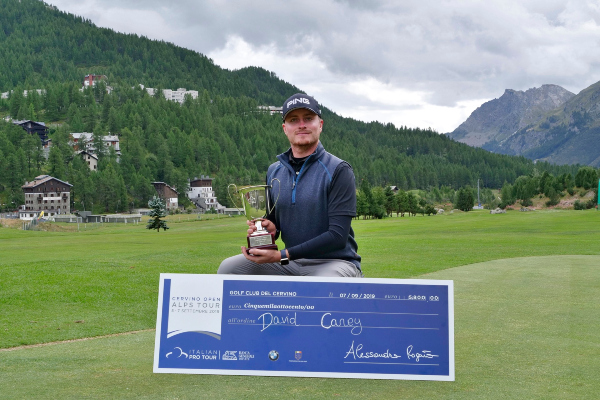 Breuil-Cervinia (Italy), September 7, 2019 – The perfect end to a perfect week for the Irish player. After his record-breaking score of 57 on Thursday and being leader throughout the tournament, after a closely fought final round, David Carey beat the Italian player Edoardo Lipparelli in a play-off to win the Cervino Open.

It was a real battle of the titans out there on the fairways of the Golf Club Del Cervino in the shadow of the Matterhorn for the final tournament of the Alps Tour 2019. Heading out for the front nine in the last flight were, Carey at -12 and the Italians Federico Maccario at -10 and Lipparelli at -8.

Carey and Maccario both had steady front nines coming in at par but Lipparelli had been gradually eating away at their advantages as he scored 3 birdies to put him in second place at -11, just 2 strokes behind Carey and one stroke ahead of Maccario.

At the turn, pars all round on hole 10. The par four 11th saw Carey increase his lead to -13 with a birdie. Maccario birdied too bringing him back to even with Lipparelli at -11.

Lipparelli dropped a stroke on the par three 12th but quickly rebounded with a birdie on the 13th to his partners pars. Carey riposted on the 14th to draw ahead a little bit further with a birdie to -14. The 15th saw par for Carey and bogey for Maccario putting him at -10 but another birdie from Lipparelli to pull into second place at -12.

The par four 16th proved decisive. Maccario double-bogeyed moving him down to -8 and Carey bogeyed putting him at -13 whilst Lipparelli made par keeping him at -12.

So, heading into the final two holes it was a head-to-head between Lipparelli and Carey with just one stroke between them.  The 17th saw no change with a deuce of pars so it was into the 18th with everything to play for. Carey executed a perfect par but Lipparelli grabbed a birdie to put them all square at -13 and force a play-off.

But in the end David Carey came through. Carey: “I’m really happy. I hit three perfect shots there. I’ve played pretty well all week but today the putts didn’t really go in, but one went in the last when I really needed it. Birdie on the last hole.”

His win catapults him twenty-six places up the Order of Merit to number 12.

Edoardo Lipparelli confirms his place at the top of the OofM heading into the Grand Final.

Alongside him is Andrew Scrimshaw from England who had joined the top ten on the leaderboard yesterday and who continued his ascension with a -4 (64) today after a bogey-free score and 4 birdies. His result moves him seven slots up to 13th on the OofM.

So, after a climactic finish, next stop is the Grand Final in Italy on the 17th October. The course location will be confirmed shortly.