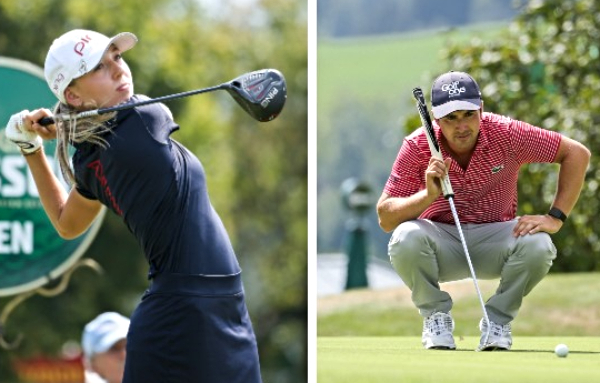 Maria Lankowitz (Austria), August 14, 2020 – It has been an exciting and eventful day here at the Gösser Open at Erzherzog Johann Golf Club. Play was finally suspended at 7:50pm due to darkness with Jordi Garcia Del Moral keeping his lead with a 131 (-13) overall with 8 holes to play.

The day started at 7:00am with Round 1 to be completed, at the end of which the top two positions stayed the same with the Spaniards Jordi Garcia Del Moral at -12 (60) leading the board and Angel Hidalgo Portillo at -8 (64).

In the group of players in third position at -7 (65), one change as the Austrian amateur, Maximilian Lechner moved up to join his compatriots Uli Weinhandl and Lukas Nemecz. That made a group of six in all with the Italians Jacopo Vecchi Fossa and Andrea Saracino and the New Zealander Shaun Jones.

At -6 (66) the group of four including Sam Robinson from England, Tomas Bessa Guimaraes from Portugal and Sebastien Gandon from France saw one movement as the Austrian Alexander Kopp moved up when the Frenchman Thomas Elissalde dropped a shot to finish -5 (67).

However, Thomas Elissalde did a rapid turnaround and started Round 2 at 9:15am with 5 birdies on the front nine and another 3 on the back nine. He was on the 18th tee when play was suspended at 1:50pm due to thunderstorms. He gave a summary of his day:

“I was up very early to finish Round 1 and didn’t necessarily do the best on the last holes as I dropped a shot on the 18th after play resumed. But Round 2 was much better where I had good course management, putting and wedging. I love this course and overall am pretty happy with my game”.

He finished the day in the number 2 slot with a -7 (65) for the day and a total 132 (-12) for the two rounds. Joining him in joint second place are the two Austrians who had moved up a shot at the end of Round 1 this morning. The rookie Alexander Kopp, winner of the Pro-am on Wednesday, continued his excellent week. Teeing off from the tenth he did mirror -5 (33) on both nines with a total of 7 birdies and one bogey.  Whilst the Austrian amateur, Maximilian Lechner, teeing off from the first had 6 birdies for just one bogey.

Right behind him in joint sixth is a group of four players at 134 (-10) including three Austrian players, Lukas Lipold, Uli Weinhandl, and Lukas Nemecz. However, Lukas is in the clubhouse whilst Uli still has 8 holes to play and Lukas 9 holes, alongwith the fourth member of the group, Englishman, Sam Robinson.

One happy player in the clubhouse today was the Austrian amateur, lady player, Emma Spitz who more than held her own coming in with a -4 (68) for the day to give her an overall 137 (-7) for the two days and placing her in joint 21st position. The Viennese native and winner of the 2018 Girls’ British Amateur Open had a very lucid approach to her game:

“I saw it as a challenge for myself to play from the back tees. It wasn’t even about playing against the guys, it was more about challenging myself. I really tried to focus on my own game, playing it hole by hole, using the birdie opportunities when I had them  and not thinking about what the other guys were doing as they hit the ball so much further than me. My goal wasn’t to make the cut, just to play the best golf I could but to end up making the cut is really cool”.

With play suspended and 69 players still out on the course, we could still be in for some surprises tomorrow. Play will resume at 7:00 am Saturday morning 15th August to finish Round 2. The aim is to then finish the third round, weather permitting. Watch this space!