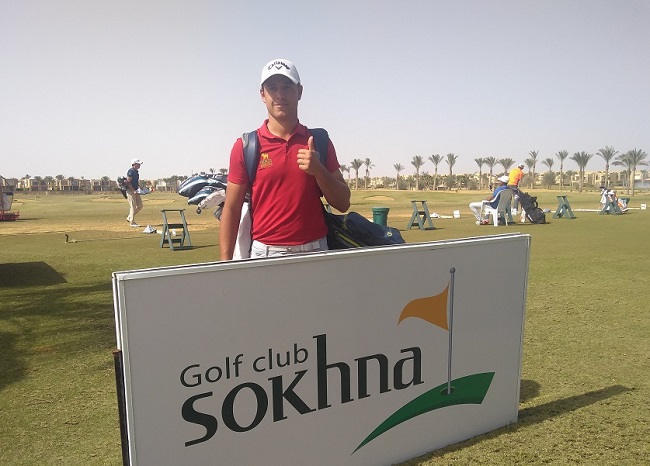 Golf feels much easier when, at the end of the day, you only have 24 putts on your scorecard; that’s what happened to Italian Enrico Di Nitto, 26, the leader after the first round of the Red Sea Little Venice Open, the second tournament of the 2019 Alps Tour season, taking place on beautiful Sokhna Golf Club in Egypt.

Di Nitto, 26, from Rome, carded 7 birdies and no bogeys on the A+B courses, a different combination than the course played for Ein Bay Open, which was on B+C : « This one is a bit more difficult I think », said Di Nitto, who was playing in the morning with warm temperatures and some wind, both rising up during the afternoon (peaks of 25 degrees and gusts at 25 km/h). « Like the other course, it is in very good conditions, and today we had fast greens and the wind made it even more interesting and challenging. I started (from hole 11) with very good driving and decent irons, and when the tee shots started to fail a little, I could react with good irons, and lots of one-putts, too – most of them from close, and one from 12 meters – which was a really nice boost! ».

On second place, with a 67 (-5), two strokes more than the leader, stands Irishman Jonathan Yates – who was tied second in the previous tournament. Six birdies in his card, and a single bogey – on hole 4, a par 3, 178 meters long which is actually rated as the second most difficult hole on the course today, with just 3 birdies, 44 bogeys and 6 double bogeys or worse.

For tomorrow, the weather forecast indicates a peak of 19 degrees, and a little less wind, at 20 km/h.