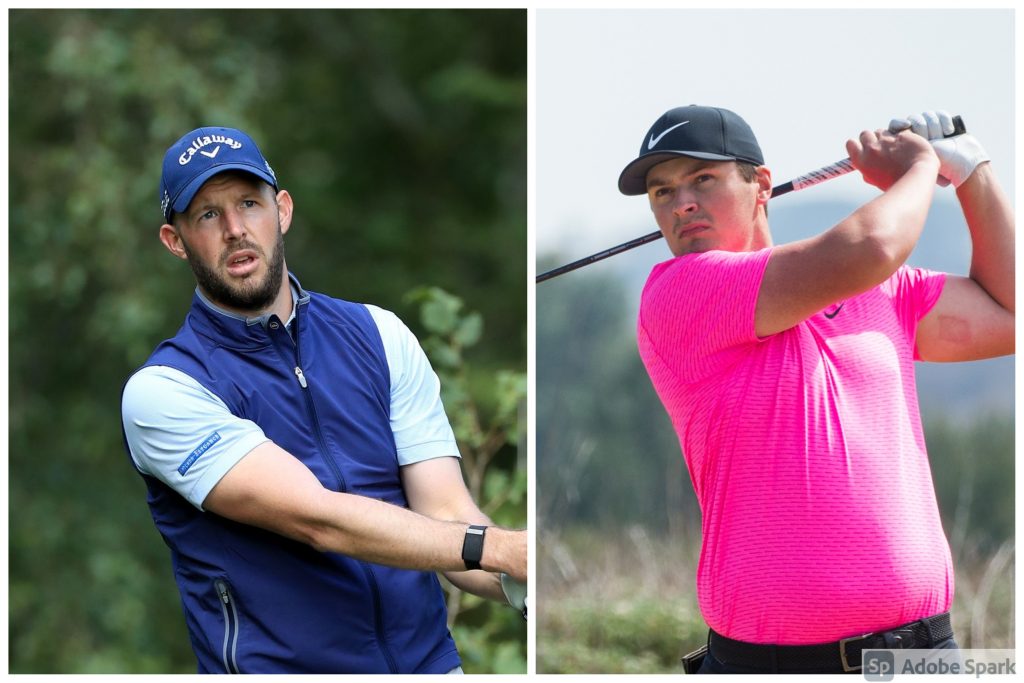 Luke Joy (left), from England, and Pierre Pineau, from France, are leading at -11 after the 2nd round of Ein Bay Open at Sokhna GC in Egypt.
20th May 2021 | Alps Tour Golf

Ein Bay Open, Joy and Pineau take the lead after second round

There was a changing of the guards on top of the leader board after the second round of the Ein Bay Open at Sokhna Golf Club, in Egypt, with a new duo leading at 133 (-11). Frenchman Pierre Pineau and Englishman Luke Joy signed respectively cards of 65 and 64 strokes, therefore jumping up from 9th and 21st position. They will tee off tomorrow at 10:55 local time for the final round with a one-stroke margin over Spaniard Angel Hidalgo Portillo, first round co-leader, who has been joined in third position at 134 (-10) by Frenchman Xavier Poncelet, author of a beautiful 66 (-6).

Joy, 32, from Dorset, England, benefited from an invite to the Alps Tour Egypt Swing tournaments and made the best use of it by carding the lowest round of the day, a bogey-free 64 (-8) with eight birdies perfectly shared between front and back nine. “I’m incredibly grateful to the Alps Tour for the invite to these tournaments. I am very happy about the chance I have been given, and I absolutely love being here in Egypt. The course is in great shape, I must say that my putting was very hot today and the course definitely fits my game”. Joy is an experienced player who turned professional in 2012 after a successful amateur career (he represented England Juniors), spends his winters training in Abu Dhabi and has won so far 8 Professional tournaments on different tours. While Pierre Pineau from Chartres, France, at 21 is one of the Alps Tour rising stars, playing in his second full season (last year he was stopped by an injury after only 2 tournaments) and finished 15th in the 2019 Order of Merit: “Obviously, it has been a good day for me, although I didn’t start at my best; I teed off from hole 10 and the putt were not going in; but then at the turn, on 17, 18 and 1, I made three birdies with short putts, and another nice birdie on the last hole after three-putting on hole n. 8. The course is good, and yes, it’s a bit hot out there, but it’s not that bad!”.

52 players including 10 amateurs made the cut, which fell at 142 (-2); among them stands out the name of Issa Nlareb, who finished his round with three birdies in the last four holes for a total of 141 (-3). The Cameroonian pro fell ill with bacterial meningitis in February 2018 during the Ein Bay Open; his life was saved, but the treatment for the septicaemia led to complications and the life-altering, partial amputation of some of his extremities. Last year, with prosthetics in place, the 30-year-old player, father of three, was back playing the tournament, declaring: “Even when I came out of the coma and couldn’t talk, I never stopped playing golf in my head. Even lying in the hospital bed, I was constantly thinking about the little white ball. I think it is what kept me alive and what has given me the strength of will to play again today.” Issa never stopped improving from that day, always showing an unbounded amount of positivity and extraordinary courage, and a lot of talent of course! In 36 holes, he marked a total of 8 birdies and 5 bogeys and tomorrow will play for his part of the 40,000 euros prize money and 45,000 overall points, with a cheque of 5,800 eu and 6,525 points for the winner.

For the results after the 2nd round click here or check the Alps Tour Golf app.