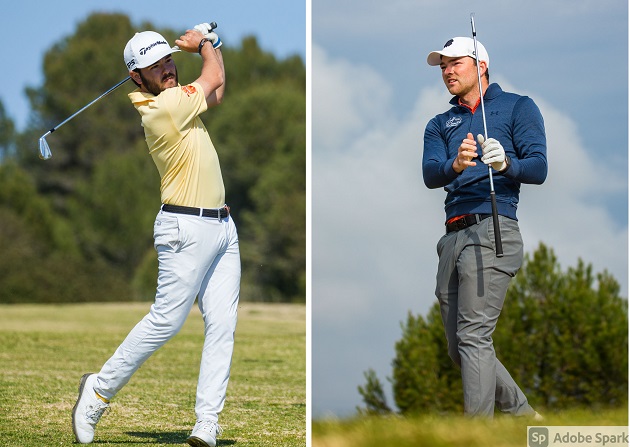 The higher temperatures – compared to what players were used to in February, the ever-present sea breeze and a course in pristine conditions, led to some brilliant scores after the first round of the Ein Bay Open here at Sokhna Golf Club, on the North shores of the Red Sea in Egypt. Two players are sharing the first-round lead at 64 (-8), Spaniard Angel Hidalgo Portillo and Dutchman Lars Keunen, followed by Italian Cristiano Terragni only one stroke back, at 65 (-7), and Frenchman Frank Medale sits on 4th place at 66 (-6).

56 players returned an under-par card, and among them is the ranking leader Jacopo Vecchi Fossa, T9 at 68 (-4) as well as compatriot Italian Stefano Mazzoli, while Paul Margolis is T47, in the mix at 71 (-1).

The defending champion Lars Keunen, 24, started off on the right foot with an eagle 2 on the first hole, then stumbled on the only bogey of the day and went on with 7 more birdies for a final 64 (-8). “I had a good day today, I’ve tried to keep the ball in play from the tee, as you have plenty of waste areas on this course, and my wedges worked pretty good, as well as the putting”, said the Dutchman who had finished on 7th position in the 2020 Order of Merit and is now playing in his 4th season on the Alps Tour. “The course is in great shape, the weather is a lot warmer than it was last year in February but it’s doable, just drink a lot of water and you should be fine. I guess it is a course that suits my game, seeing what happened last time! Today I got lots of chances and I took them”.

A similar beautiful round for the co-leader Angel Hidalgo Portillo, 23, who started off hole 10 and had four birdies on the back nine and five birdies and one bogey from hole 1-9: “My drives were not the best part of my game today, I’ve been a little inconsistent, but on the contrary my irons were good and especially my putting was really solid. The greens are quite difficult because of the kind of grass, but I have managed to read them well. It’s the first time I play so well this course actually, in my previous tournaments here I had missed the cut twice so I am really happy that I’ve started so well this time and I really hope that the rest of the week will be as successful!”.

The weather forecasts remain dry, sunny and breezy with temperatures on the rise to about 35°.

For the 1st round results, click here or check the Alps Tour Golf app.