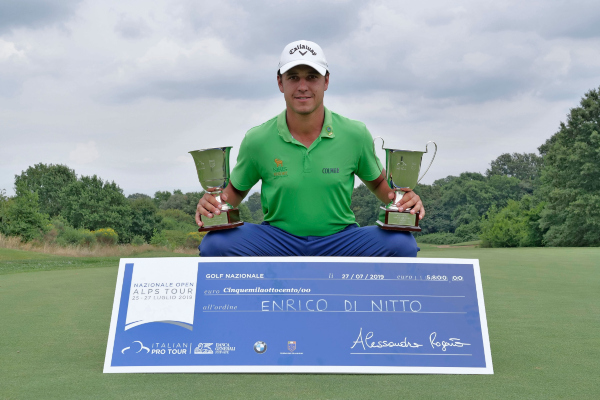 Enrico Di Nitto Back on Top to Win the Nazionale Open

July 27th, 2019 – Rome, Italy – With a -10 (206) for the three days, the Rome native, Enrico Di Nitto, had an emotional first 2019 Alps Tour victory here in the Nazionale Open at the Golf Nazionale. In front of plenty of local support from friends and family, his win keeps him right on track for his goal of being in the top 5 at the end of the season.

Indeed, his first place today now puts him in third place on the Order of Merit with just one event to go before the Grand Final in October.

Di Nitto: “This is my second win on the Alps Tour but my first win for a very long time and I’m happy to win here in Rome too.”

He admitted to having had some problems with his performance in the second rounds during the season However, he managed to put yesterday’s disappointing second round, result behind him to card a -4 (68) with five birdies and just a single bogey. With 8 top ten finishes this season before today’s win, he was pleased to finally get the desired result:

Di Nitto: “I’ve had some great rounds this year but never finished the way I liked. I have made a lot of good first rounds on the Alps Tour, but the second rounds have often been really bad. Yesterday I was a little bit frustrated with the ending of the second round, but my coach Maximus Scarpa helped me a lot this week so I’m very happy he was here.”

In second place was the English player, Ben Amor at -8 (208) for the tournament. He started the round with an extremely strong front nine finishing with a -4 (32) including an eagle on the par 3 seventh.  Despite another birdie on the back nine, two bogeys saw him finish the round at -3 (69) for the day. But his runner-up position gives him his second top ten finish in this his rookie season on the Alps Tour.

Yesterday’s leader, Uli Weinhandl from Austria, finished in third place at -7 (209). He saw his lead gradually eroded away by a difficult first round which included two bogeys and a double bogey on the par 4 fifth. Despite a strong rally coming into the clubhouse his +1 (73) for the day didn’t allow him to get back on top of the leader board.

With a pause in the season in August, the Alps Tour resumes play in September for the final tournament before the Grand Final in October. The 2019 Cervino Open takes place from 5th to 7th September at the Cervino Golf Club in Valle d’Aosta region in the northwest of Italy.