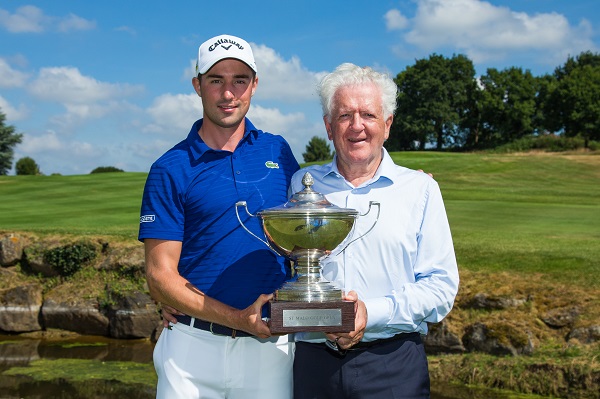 Stepping up on the first tee at the Saint Malo Golf Resort on the final day of the ground-breaking Saint Malo Mixed Open, just one stroke separated Alps Tour player, Frédéric Lacroix from France (-17) and Manon De Roey, the Belgian LET Access Series player (-16). Joining them on the tee-box was Alps Tour player, Enrico Di Nitto (-13).

The first two holes saw all three players giving tit-for-tat with par and birdie for each of them. The next four holes were a veritable ping-pong match between the Belgian and the Frenchman with the Italian putting pressure on both.

Lacroix and Di Nitto both carded pars on the third but De Roey sank a birdie to draw even with the leader at -18. But the Frenchman’s riposte was immediate on the par 3 fourth with another birdie to pull ahead again at -19. De Nitto was right up there with him as he also birdied the hole to move to -15.

But the Belgian came right back on the par 4 fifth with her third birdie of the day to put her neck and neck again with Lacroix at -19.

The par 3 sixth saw a minor blip on De Roey’s card as she scored her first bogey of the day and slipped back to -18 whilst Lacroix made par to stay steady at -19. De Nitto continued to steadily duplicate Lacroix’s score with a par to maintain -15.

The next two holes saw Lacroix shift gears with two birdies in a row to put him at -21. De Nitto followed suit moving to -17 whilst De Roey’s two pars kept her at -18.

At the end of the front nine Lacroix and Di Nitto had identical scores at -4 (32). Frédéric Lacroix:

“The front nine wasn’t easy because Enrico had a good start too. He was always there and when I made birdie he made birdie.”

The leader board at the start of the back nine showed Lacroix at -21, De Roey at -18, Di Nitto at -17 and everything still to play for.

Par for all three players on the first two holes then on the par 4 twelfth, Di Nitto took another birdie, his fifth of the day, to put him even with De Roey at -18.

Steady pars for all three until the par 5 fifteenth when Lacroix made a birdie to move to -22 and Di Nitto did another copycat score moving him to even with De Roey at -18.

Barring catastrophe, Lacroix looked set to for first place and the battle was on for second position heading into the signature hole 16. Par for the men but an unfortunate bogey for Manon De Roey moved her back to -17.

Three pars across the board on the seventeenth and down the eighteenth heading into the clubhouse.

Lacroix’s tee shot went a little left giving him an unfavourable lie, so he chose to lay up and not risk the water hazard in front of the green. Di Nitto’s drive went straight down the fairway putting him on the green for two as did De Roey’s second shot.

Obviously, the fat lady was now singing but Enrico Di Nitto had not had his last word as he finished the round with a seventh birdie for a total of -20. Manon De Roey continued to show her formidable fighting spirit by also birdying the hole for a final -18.

Both players were more than happy with their performances. Enrico Di Nitto:

“I feel really happy about it. I made no bogeys today and I finished the weekend strongly with a 20 under, so that was great. But Frédéric was really strong too today.”

“I’m quite happy with the week and how it went. Today wasn’t as good as the last few days but I’m happy I finished in the top three. Today I didn’t make enough birdies and Frederic played really well and solid.”

“I just didn’t make any mistakes. That’s the key on this course, I think. Overall there are guys who made more birdies than I did but I kept it steady and made good saves when I needed to.”

With his third Alps Tour victory of the season, Frédéric Lacroix now moves directly to the Challenge Tour.

A fantastic climax to the inaugural Saint Malo Mixed Open witnessing a mixed podium from the Alps Tour and the LETAS. The reaction from players from both tours to this ground-breaking format has been overwhelmingly positive and promising for next year’s event.

Next stop for the Alps Tour is the Fred Olsen Alps de La Gomera in the Canary Islands from 11th to 13th July.