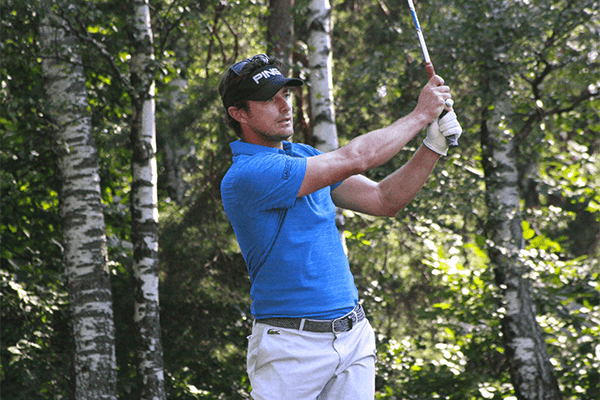 France’s Julien Foret enters the final round of the Des Iles Borromées Open presented by Cashback tomorrow as leader with a total score of -13. Foret shot 3 under today to retain sole leadership of the tournament.

Foret is followed by Andrea Saracino (ITA) at one stroke behind (-12 total) and by Davey Porsius (NED) at -7 total.

Marcus Mohr (ENG) turned in the best card of the day at the Golf Des Iles Borromées at -7 and move ups to 4th place at -6 total.

«  I’m rather satisfied with my score. 3 under is not a bad score considering today’s conditions. There was more wind than yesterday, it was very hot and some of the pins were pretty difficult. We had to be careful » Foret said.  «  It could have been a lot better if I had made some putts on the way back » he continued. «  Tomorrow is another day, there is a nice challenge waiting for me. These are situations we like to be in, this is what we’re playing for » he concluded.

«  Today was a good day, I’m very happy » Andrea Saracino said. «  I made 3 under with 5 birdies and a stupid double bogey on hole 17 » the 24-year-old player from Rome explained. «  I hope to play good tomorrow and to win my first professional tournament » he concluded.

« It was a very pleasant day, it was nice to get out early because it was a little bit cooler on the front 9 » Marcus Mohr said. « I was playing with Andrea Saracino who shot an amazing round yesterday, he was playing very steady today so it was easy to off feed from him, we were all hitting well, the group was playing well » he explained. «  My girlfriend Amy is here, she was caddying me for the first time ever and it went well. For tomorrow, I’ve got to stay patiently agressive, there are some many birdies out there so I’ll try to shoot as low as I can » Mohr concluded.

53 players including 8 amateurs made the cut set at +1 and will play tomorrow’s final round.

Final round will tee off at 8h local time.