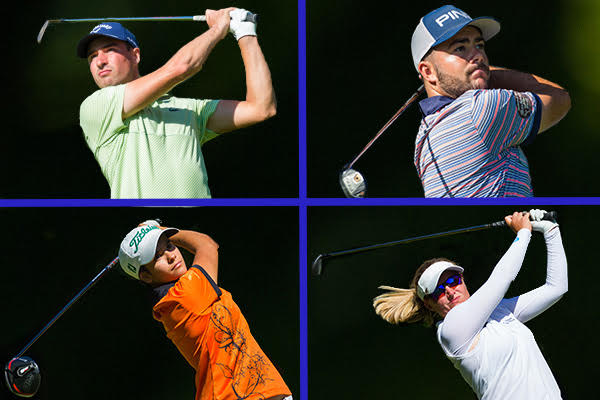 Frédéric Lacroix and Clemens Gaster joint first after Round 1

St. Malo (France), July 4, 2019 – It was a glorious, sunny, opening day at the Saint Malo Mixed Open in Brittany and the word ‘fun’ was on the lips of all the players at the end of the round.

Frédéric Lacroix, playing for the first time at the Saint-Malo Golf Resort confirmed:

“This is my first time playing in a mixed tournament and it’s fun. The course has some tricky tees and corner pin positions but it’s a pleasant and amusing course to play”.

With six birdies for the 18 holes to card a 66 (-6), the French player is very much focussed on his aim of finishing in the top 5 of the Alps Tour this season. He has already had two wins in 2019 at the Ein Bay Open and Alps de la Castillas and has a clearly defined target:

“I just need one more win to graduate for the Challenge Tour. That’s the goal for the last four tournaments. I just need to do the same thing tomorrow and the day after and the day after that and hopefully come out on top. I like to take small steps towards that goal.”

Joint leader Clemens Gaster from Austria who had a solid game from driving to putting, posted seven birdies and thoroughly enjoyed his day:

“I played good golf, really enjoyed the course and it was nice to see what it’s like playing against the ladies. It was fun.”

Clemens is looking for a new win after his last first place in 2017 at the Alps de Andalucia.

But in third place at 67 (-5) the Peruvian LETAS player, Maria Palacios and the Belgian, Manon De Roey are part of the group of six players breathing down the leaders’ necks.

Maria Palacios whose boyfriend, Ross, is caddying for her played with the French player Edouard Espana and the Belgian, Kevin Hesbois.

“It’s the first time I’ve played with the boys and it was fun, both very nice guys.”

Maria started the front nine with a bang scoring an eagle on the par 5 first hole despite having driven into the rough. A fantastic 3-wood recovery shot gave her the result.

Right alongside Maria is Manon de Roey who carded six birdies in her game with playing partners, the English amateur player, Jack Floydd and the Dutch player, Davey Porsius.

The rest of the third-place six-pack is made up of Irishman Jonathan Yates, the French players Maxime Radureau and David Antonelli, and Austrian Timon Baltl.

Both men and ladies agreed not only on the great condition of the course but also on the layout. Frédéric Lacroix:

“The course set-up seemed pretty fair to me for both the ladies and the men.”

“I think the set-up was fair to players from both tours. It would be fun to have more events like this in the future.”

Tomorrow’s round promises to be exciting with the ambitions of the LETAS players clear as the Belgian player Chloe Leurquin said:

“I think it would be amazing for a woman to win this week. We see how low those guys shoot every week. Even if a woman doesn’t win, hopefully we can show that we are good, we can shoot under par and we are fun to watch as well.”

Let the battle continue in Round 2!