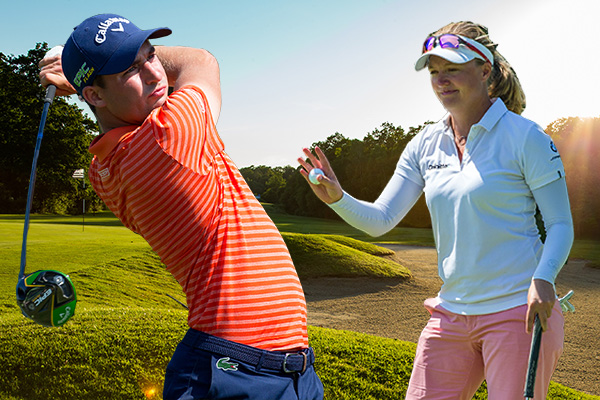 St. Malo (France), July 6, 2019 – Play opened at Saint-Malo Golf Resort with Frédéric Lacroix trailing the previous day’s leader, Manon De Roey, by just one stroke. At the end of the day, the roles had been reversed with Lacroix scoring a -7 (65) for the day for an overall -17 for the tournament so far.

The first three holes saw the two players neck and neck and then Lacroix narrowed the gap to one stroke with a birdie on the fourth.

Hole six was the game changer when Frédéric Lacroix scored a birdie to put him at -14 and Manon de Roey carded a double bogey leaving her at -13 under.  The front nine saw the Frenchman finish at -6 to the Belgian’s -1.

The back nine saw Lacroix continue to demonstrate the consistency of the past 3 days with 8 pars and 1 birdie.  Frédéric Lacroix:

“Seven under, it’s a good round even though it could have been a bit lower on the back nine. I struggled a bit with the wind when it picked up and missed a couple of easy shots”.

He may have struggled a little with the gusting wind, but his short game came to the rescue on more than one occasion. Frédéric Lacroix:

“It was pretty solid today. As soon as I got in trouble, I could rely on my chipping to get out of that tricky situation. So, it was great”.

Manon de Roey who finished at -16 continued to play steadily and was not at all discouraged by her double bogey on the sixth and remains extremely positive about her chances. Manon de Roey:

“I’m still happy with my round. It wasn’t as good as the last two days, but I still finished with a minus three. I’m just one shot behind and I still think I can win.”

In third place, the Italian, Enrico Di Nitto came in with an excellent –6 (66) for the day and an overall -13 for the three days. The 26-year-old player has had 6 top ten places on the Alps Tour this season but his last victory dates back to the 2015 Open Colli Berici.

Close behind the leaders at -11 are a group of 5 players. The French player Teremoana Beaucousin, the English player James Sharp, the Irishman Jonathan Yates, the Dutch player Davey Porsius and the Swiss player Arthur Ameil-Planchin.

The next-placed players after the number two are all in the top 20 with Rachael Goodall from England at -8, Laura Murray from Scotland and Maria Palacios from Spain at -7..

The final day promises to be a closely contended competition.

Tee-off starts at 8:40 tomorrow morning  with the last flight departing at 11:45.