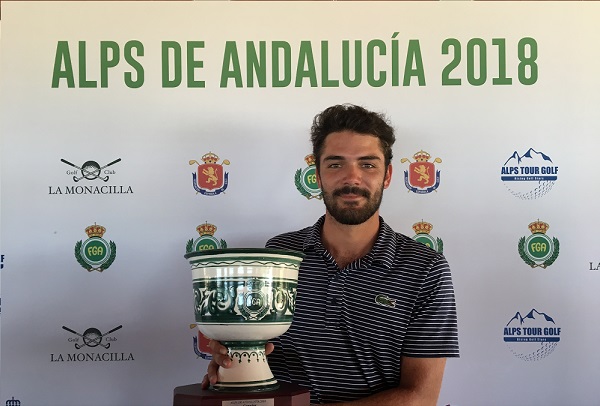 It was Daydou’s first victory on the Alps Tour. Daydou turned in the best card of the day at -6.
Miguel Gaspar (POR) finished in 2nd place with a total of -8 while Louis Cohen Boyer (FRA) came in 3rd place with a total of -6.
«  I’m very happy because I spent 2 year in the Alps Tour and I lost twice in the playoffs. It’s really hard, there are lots of good players on the circuit, so I’m very happy with this win » 21-year-old Daydou, a native of La Réunion island, said. «  I started perfectly with 4 birdies on the first 5 holes. I putt very well, made some good shots. And then I made a real bad double bogey on hole 8. After that, I just kept playing, trying to make some birdies. In golf, you never know what happens, so you just keep playing, try to make some birdies and you see what happens » Daydou explained.
«  For me, today was just perfect. I really enjoyed the course. It’s really hard to drive on this course as the fairways are very small. You just have to be really focused on the tee and then make some putts and today, it was incredible » he concluded.
Daydou made a total of 8 birdies and a double bogey in the final round.

«  I’m a bit unhappy because I felt I had a good chance. But that’s the way it is in golf » Portugal’s Miguel Gaspar said. «  I feel pretty good about my game in general. I played really good on the first day, I did not make any mistakes. I did not play very well in round 2. And today it was about the same, I did not hit the ball very well. I had a provisional today and I did not hit the ball quite well in the last 4 or 5 holes » he explained. Gaspar made 3 birdies and a bogey in the final round.

«  I’m happy with my result. The day went well, I played well, so it’s rather positive for me » Frenchman Louis Cohen Boyer said. «  I would have liked to get closer to Alexandre but he played very well today. I missed an important putt for birdie on hole 17. I think it’s one of the only holes on the course where you can make a break from the others. My putt was 2m50 long but I missed it » he explained. Cohen Boyer made 4 birdies and 2 bogeys in the final round.

Marcus Mohr (ENG) still leads the Order of Merit, the Alps Tour official season ranking. Louis Cohen Boyer moves up to second place with today’s finish while Alexandre Daydou jumps to 4th place on the Order of Merit after his win today.

Weather conditions were sunny with some wind and temperatures in the mid 20s.