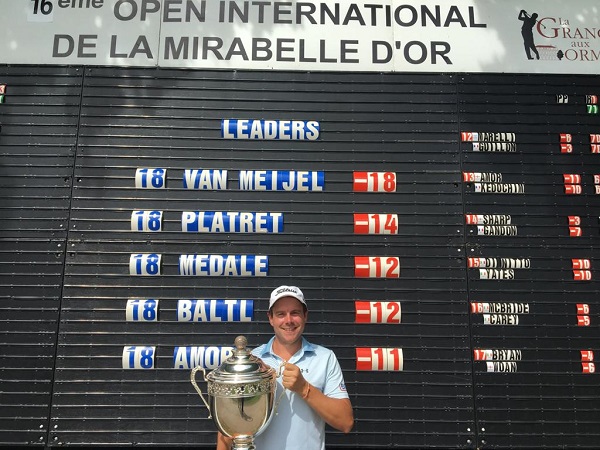 Van Meijel admitted to having struggled to find his rhythm going out as the windy conditions today made play more challenging than yesterday. He put the bogey on hole 2 down to this rather than nerves as he had a good drive but missed the approach shot: Van Meijel “I had a short pitching wedge  shot and I got the wind maybe slightly wrong so I went just over and had a tricky lie”. He rapidly mastered the weather conditions as he finished the front nine with 2 birdies and five pars for a -1 (34).

His confidence was reinforced on the back nine as he birdied the first 4 holes followed by 4 straight pars.  The wind again played a role in the only glitch coming in as he finished short of the green on the par 4 hole 18 and saw his first putt just slide past the hole for bogey. But victory was in the bag along with the 6,235 € prize money.

Lars adds this 2019 trophy to the one he won at the Red Sea Little Venice Open in 2017. His win sees him move up 10 places on the Order of Merit to number 5.

In second place, 24-year-old Frenchman Nicolas Platret improved yet again on yesterday’s result with an excellent round of -6 (65) which included 7 birdies that more than compensated for the sole bogey on hole 1. His overall -14 (199) for the tournament gives him his first top ten finish of this, his rookie season.

Completing the podium at joint third were Frenchman Franck Medale and Austrian Timon Baltl at -12 (201) for the 54 holes.

Medale had started the round two points behind the leader and opened with a solid front nine to narrow the gap to one stroke between him and Van Meijel on the front nine. But two bogeys on the back nine saw his advantage eaten away and he finished with a -2 (69) for the day.

Whilst Timon Baltl, recent runner-up at the Acaya Open and winner of the 2019 Gosser Open, showed his fighting spirit again, carding a -5 (66). He started with a somewhat eclectic front nine: two bogeys, four pars, a birdie and an eagle. But settled down on the back nine to give him his third top ten finish of the season and keep him at fourth on the Order of Merit.

Next stop for the Alps Tour is the 2019 Saint-Malo Golf Mixed Open with LET Access Series in Brittany, France, from 4th-7th July 2019. This first in European professional golf will see 72 male players from the Alps Tour and 72 female players from the Ladies European Tour Access Series competing for the same trophy and the same 45,000€ prize money.