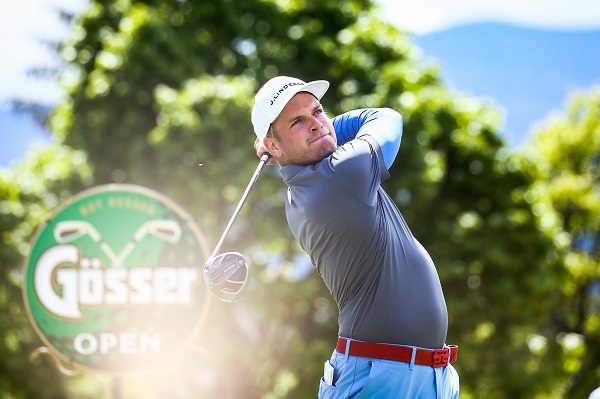 Bernard Neumayer, 28, is co-leading with Luca Cianchetti at -12 after the second round of Gosser Open. Photo GEPA-pictures
17th May 2019 | Alps Tour Golf

Gösser Open, Cianchetti and Neumayer go head-to-head into final round

17 May, 2019 – Maria Lankowitz (Aut) – The 27th edition of Gösser Open is meant to experience a thrilling final day, when Italian Luca Cianchetti – leader after first round – and Austrian Bernard Neumayer, tied at minus 12, will go head-to-head hunting for the coveted title and the cheque of 6,162 euros for the winner.

Neumayer, 28, was able to catch Cianchetti on top of the leaderboard with a 68 (-4), in spite of two bogeys (on holes 8 and 14): “It is the first time that I play in the final group in an Alps Tour event – he said –my goal is to get the lead soon and don’t let anybody else approaching me. I had two 3-putts today, but I’ve played solid golf from tee to green; tomorrow I will need to keep the 3-putts away and hopefully it will be a good round! I’m sure that there will be a lot of spectators and I’m really looking forward to it”.

Yesterday Luca Cianchetti, 23, not only shot his personal record – 63 (-9) but also tied the course record of Golfclub Erzherzog Johann, first signed in 2005 by Thomas Feyrsinger and again by Claude Grenier in 2011, both during those years edition of Gösser Open; today, the winner of the Katameya Open last March was not as consistent, and after leading for most of the afternoon and reaching -14 after hole 10, he then slipped with 2 bogeys on par 5s: “The first 10 holes I played well from tee to green, I had two eagles – on hole n. 1 and 9, two birdies and one bogey-5 – maybe the putter was not as faboulous as yesterday, but I’ve made some clutch putts; then on the back nine I’ve started to loose a bit of focus and made those two bogeys, but in all I’m quite satisfied, I’ve been playing under par for a while and this is always a good sign. Tomorrow I might feel some pressure in the beginning, but I will try to play at my best, and let’s see”.

The best card of the day was returned by English amateur Jack Floyyd, who shot 64 and is now in third position just one stroke back of the leaders (133, -11); in fourth position are two players tied at -10: another impressive amateur, Frenchman Jeong Weon Ko, and local hero Lukas Nemecz, winner of this tournament in 2017.

The cut fell at -4, leaving 55 players in the field for the final day ; among them 7 amateurs, who will not compete for the prize money, 42,500 euros.

Golfclub Erzherzog Johann in Maria Lankowitz, near Graz, has been hosting the Gösser Open since 1993, seven years before the birth of Alps Tour itself.