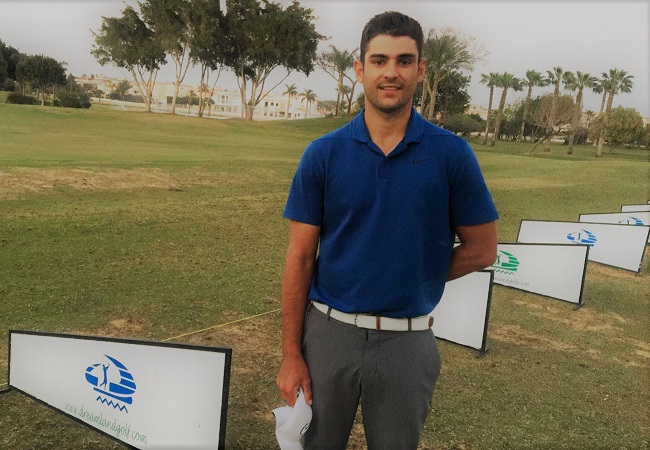 Grimal starts off on the right foot

An overcast sky, cool temperatures and strong winds, with gusts of 30 km/h welcomed the opening round of Dreamland Pyramids Open, which started today at Dreamland Golf Club in Cairo, Egypt. It is not suprising then, that only 32 players scored under par: the best of them all was Frenchman Benjamin Grimal, 27, a rookie for Alps Tour but on his second season as a touring pro, who signed a 66 (minus 6) with 7 birdies and a single bogey towards the end of his round, on hole 8, a par-three (his 17th).

The weather conditions progressively improved during the day and Grimal might have taken advantage of them, having started his round in the last team, at 13:25, but his performance was nonetheless impressive as he ended the 18 holes with 2 strokes margin over six players – Austrians Ralph Leitner, 20; Timon Baltl, 23; and Lukas Nemecz, 29; Italian Alessandro Grammatica, 29 (who, in the last 5 holes, had one double bogey, 2 bogeys and 2 birdies!); Swiss Arthur Ameil-Planchin, 24 and Dutch Lars Van Meijel, 24 – which all scored 68.

« I’ve putted really well today – said Grimal – « all day I was not really attacking the flags but just trying to hit the greens since my iron game has not been very good lately; I’ve sinked a couple from 11 metres and a few from 3-4 metres, so that was really the key. The greens were not very fast, and you had to be careful on your approach shots and hitting the greens from the good angle. I’m very proud of the way I have played, I’m back after a very difficult year when I had serious injuries and I thought I might not be able to play again, so it is a great feeling ».

Tomorrow the weather forecasts are a bit more favourable, with less wind and milder temperatures in the 20s degrees; at the end of the day, only the best 40 players and ties will be admitted to the final round and to share the 40,000 euros prize money.

The Dreamland Golf Course is a world class facility located just a few minutes away from the Great Pyramids. The layout of the course was designed by the world renowned architect, Karl Litten and in 2010 the course was redesigned by popular Irish architect David Jones. At present it consists of 36 beautifully manicured challenging holes. The Championship Course in total measures an impressive 7,205 yards that can be played from five sets of tees, as well as a floodlit driving range. http://dreamlandgolf.com/