In their words: the winners of the Alps Tour rankings share their memories

The Alps Tour is turning 20 years old: as old, as young, as some of our members. Its story is strictly connected to those of the 20 remarkable players who have won the Order of Merit, year after year. That’s why we thought that one of the best ways to celebrate our 20th anniversary is to let them talk about their experiences, and their memories.

We start from the beginning, with the words of the first four winners 2001 – 2004, all of them Italians – at that time the tour was not as cosmopolitan as it is now! More will follow in the next few weeks. Enjoy! 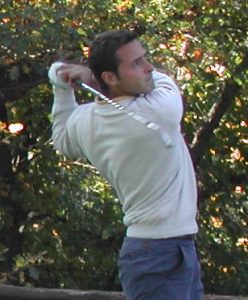 “The Alps Tour has been the springboard for my professional career. I remember very well the first year when we would wander around Europe by car, looking for the golf courses which sometimes were literally in the middle of nowhere!

I was coming from some golden years as an amateur, I was 19 and decided to try my chance as a pro with this new-born tour, which granted the card for the Challenge Tour to the top 5 in the ranking – I thought it would be a good training ground to start tasting that world bypassing the European Tour QSchool.

I started on the right foot and had some good results very soon, then won my first pro tournament in Crans, the Memorial Olivier Barras, which also gave me an invite to play the Omega Masters, wow!

I remember a wonderful year, full of gratifications and new friendships. The Alps Tour has given me the possibility to play the following year the European Challenge Tour where I’ve been a regular for 12 consecutive seasons, but as soon as I had the chance I would go back and play some Alps tournaments. For me, it was like coming back home!”. 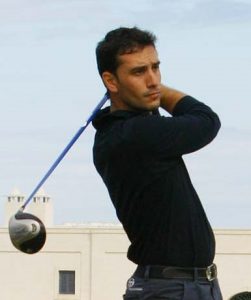 “Playing the Alps Tour has been the best golf experience of my life. It was like living in a family and it made me feel good – that is why I was playing so well!

With the French players, the Spaniards, and all the others, we were not just playing together the same tour, we were all friends. After the last putt, all the players would run to the winner spraying water and hugging and congratulating, it was like having a party!

I remember when towards the end of the season I was already leading the ranking with a large margin and was in a good position for also winning the last tournament, but at a certain time in the last round I hit a horrible shot and started to lose my focus. I had my father on the bag and he got mad at me, saying that I was going to hand the trophy to Lionel Alexandre, with whom I was sharing the match. I said to dad, ‘And so be it!’! I had already secured my card, and I was happy for Lionel to have a chance to climb the ranking – which he did eventually, as he finished 3rd that year.

Since then, I have always missed that friendly atmosphere and the sportsmanship we had on the Alps Tour!”. 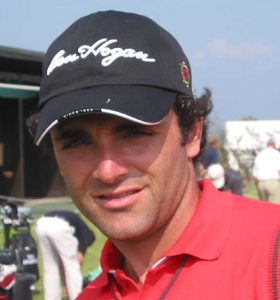 “Playing the Alps Tour was undoubtedly the best possible choice for a young pro, and it was a no-brainer for me since its beginning, in 2001. I was 25 at that time and I remember that first year I made the cut in 9 tournaments out of 10.

In 2003 the schedule would count 19 tournaments in five different countries, and six of them were hosted in Italy: I won three times within one month, in summer, and went on to be the best in the Order of Merit that year in front of some remarkable players who then had great results in the European Tour like Felipe Aguilar, Gregory Bourdy and Felipe Lima. Really, it was a super experience!

After my experience on the Challenge Tour, I’ve been back playing the Alps for many years after – I have been a member until 2011 – and I keep so many good memories about it all!” 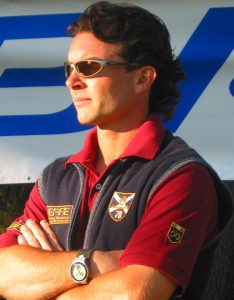 “2004 was a year to remember for me, my golden year! And also the jumping board for my career. Until then I had never won a pro tournament, I had played some Alps events before, but never full time. But when I realized that with 20 tournaments that tour was the best path for me to forge and strengthen my experience, I was able to collect my first Open – the Open de Marcilly, I remember a very tough five-way playoff!

Since then, everything has changed. By realising that I was able to win, my game evolved and so did my mindset, and my scores reflected my new awareness. I ended up by winning the Order of Merit and my card for the 2005 Challenge Tour, but this was not the end as with Alessandro Tadini we brought Italy back in the World Cup, and then I also conquered a card for the European Tour at the QSchool.

For me the Alps Tour has meant a fantastic opportunity and a stairway to the international golf world. And the story repeated 11 years later, when I returned to the Alps QSchool in Spain at La Cala and went on to win the Open de Guadeloupe in 2015, then finish 7th in the ranking which resulted good enough to gain another Challenge Tour pass and from there, my third season on the European Tour.

After 20 years I can undoubtedly give credit to the Alps Tour for always evolving and for being a solid landmark in the international golfing world. Congratulations to all the staff and… long live the Alps Tour!!!”.

More stories will follow in the next few weeks, stay tuned!