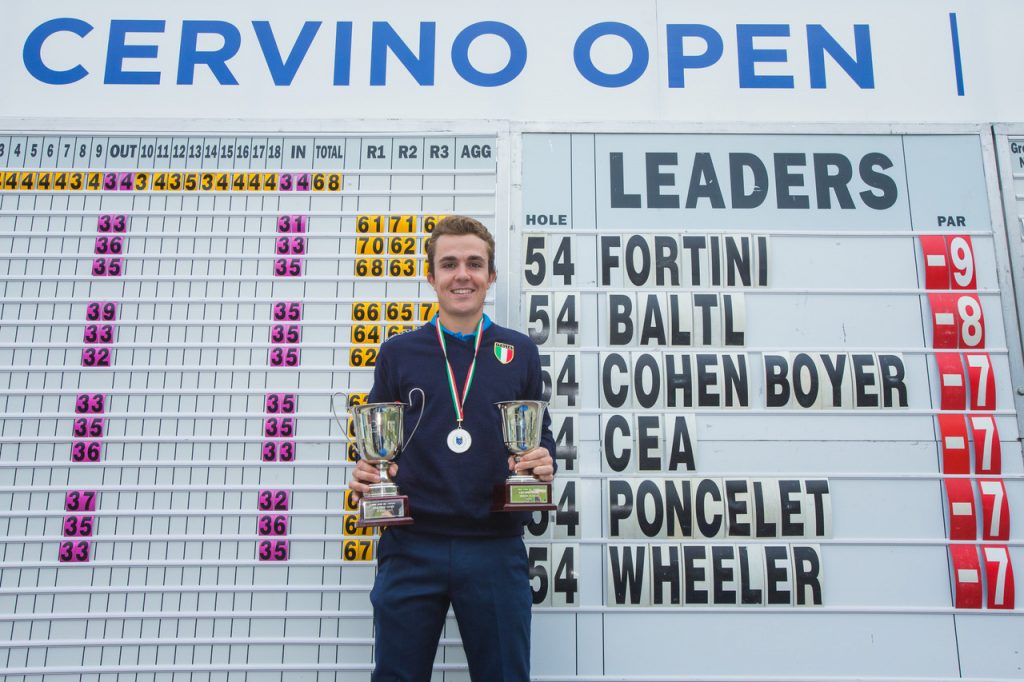 Italian amateur Giacomo Fortini won today after a nerve-wrecking finish the Cervino Open with a total score of -9 at the Cervino Golf Club  in northern Italy.

This is Fortini’s first victory as an amateur in a professional tournament.

Fortini entered the final round as sole leader and led throughout most of the day. But the Italian amateur bogeyed hole 15 and double-bogeyed hole 16 giving a path to victory to Timon Baltl (AUT) who had already finished his round. Fortini was able to react and made 2 birdies in the last 2 holes to win the tournament.

«  I’m feeling very emotional, I’m very happy because I won my first pro tournament as an amateur. I’m on cloud 9 really » 22-year-old Giacomo Fortini said. «  It was a hard final because I played well all day but I did not hole many putts. When I got to hole 15, which is a quite difficult hole, I made a bogey. The following hole, I double bogeyed. I was a bit destabilized by all this but then I told myself there are still 2 more holes and I can still make birdies.  And this is what happened and I won by one shot » the native of Ferrara explained.  «  Generally, I have a difficult time forgetting my mistakes. But today was different and I could leave those mistakes behind me and get my confidence back. I hit a beautiful driver on hole 17, I made a very nice approach shot and above all, I holed a 2-meter putt which gave me the victory » he added.

«  This is by far the most important tournament I’ve won, I never won a championship before, this is the most beautiful win of my career » Fortini concluded.

Fortini made 4 birdies, 2 bogeys and a double bogey in the final round.

«  I had a great day today » Timon Baltl said. «  I made a bogey on hole 15 and I thought to myself, ‘alright, it’s not going to happen, not even close’. But then I made a very good second shot on hole 16 and on hole 17, I did an absolutely perfect drive, I was lucky with the bounce, it bounced to 3 feet and I made this one for eagle. And then I thought, ‘oh maybe, if I make another birdie, who knows what happens?’. And on hole 18, I pitched it to 2 meters, holed the putt to make birdie, it was great, it was really cool » he explained.

«  I’m satisfied, 2nd place is very good, if you’ve come so close from winning you’re a bit disappointed but I want to congratulate Giacomo for his great finish and for his victory » the Austrian concluded.

Baltl made an eagle, 4 birdies and 2 bogeys.

Xavier Poncelet (FRA) turned in the best card of the day today (-7). «  I wanted to have a great day today. It did not start well as I made a double bogey on the first hole. But then I reacted well » Poncelet said. In total, the Frenchman out of the Golf du Médoc near Bordeaux made a double bogey and 9 birdies today. «  I’m happy with the attitude, I’m getting closer to where I want to be » he added.

With his 3rd place finish today, Poncelet moves up to 5th place in the Order of Merit, the Alps Tour official season ranking. At the end of season, the top 5 of the Order gets a card to play on the Challenge Tour.

Today’s final round was interrupted for 1h32 due to foggy conditions.

Rising golf stars will next travel to Miglianico (Italy) for the Open Abruzzo September 20th through September 22nd.