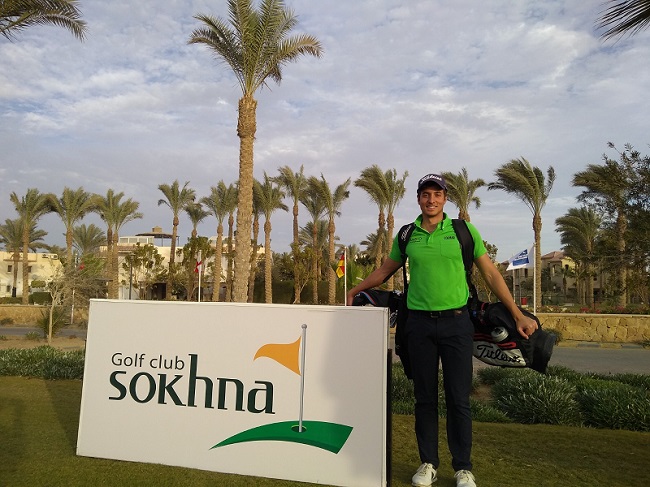 For the 120 players competing in the Red Sea Little Venice Open, the hardest opponent to beat was the wind today on Sokhna Golf Courses A+B, where gusts of 35 km/h were blowing while average scores were rising more and more. But this seemed not to bother Italian Federico Maccario, who added a 68 to yesterday’s 69 and is comfortably leading the field at minus 7, with a three strokes advantage over Englishman Jack Clarkson with just one round to go.

Maccario, 24, returned the best card of the day in spite of a double bogey on hole 2 (his 10th) – thanks to a fire start with six birdies and a single bogey in the first eight holes, then another birdie on the 8 (a par-five). Hole number 2, a par-4 of 394 metres, was actually rated as the most difficult hole of the day, according to statistics which indicate an average result of 4.47 strokes.

« I knew it would have been a difficult day today, I had seen the weather forecasts so I knew the wind would blow strong and from a different direction than yesterday », said Maccario, who has returned to Alps Tour after gaining his card for the Challenge Tour at the end of 2016. « Some pin positions were quite hard, too, but I’ve started very well from hole 11 with 6 birdies – I also holed an approach shot and a long putt – and then in the front nine, into the wind, I could manage to play well and keep my concentration, with a consistent game. I’m quite satisfied of the job I’ve done during the winter with my coach Massimo Scarpa, after a difficult year I’m starting to see some good results ».

On third position, four players of four different nationalities are tied at 141 (-3) : they are Felix Schulz from Austria, Ben Wheeler from England, Tomas Santos Silva from Portugal and Mathias Eggenberger from Switzerland. First-round leader Enrico Di Nitto dropped in 7th place with a 77 today, tied with Lars Keunen from The Netherlands and Timon Baltl from Austria.

Italian Carlo Casalegno holed-in-one par-3 n. 6 with a 8-iron from 167 metres; it was the third hole in one recorded since the beginning of the 2019 Alps Tour season.

The cut fell at 148 (+4), leaving 50 players (49 pros and one amateur, Frenchman Thomas Le Berre) in competition for the third and final round, starting tomorrow at 7 am. The winner will pocket a cheque of 5,800 euros out of a 40,000 euros total prize money.