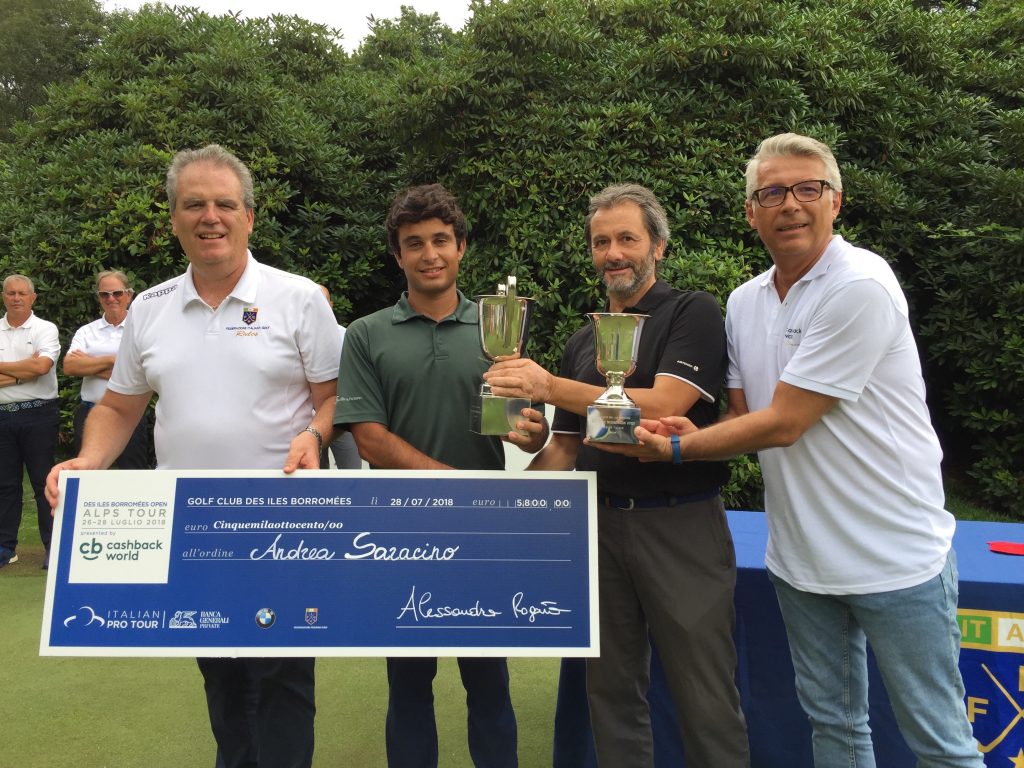 It was Saracino’s first professional victory at the Golf Des Iles Borromées.

Tied for 2nd place are Julien Foret (FRA) and Santiago Tarrio (ESP) who finished 6 strokes behind Saracino at -12 total. Foret had entered today’s final round as leader of the tournament at -13 total.

France’s Victor Marchiset turned in the best card of the day at -7. He finished in 4th place at -11 total.

«  I’m very happy » 24-year-old Andrea Saracino said. ” Today was easy even though I was a bit nervous. I made 7 birdies and 1 bogey. I started with a birdie on the first hole, then I birdied on holes 5 and 6 » he explained. «  This week was rather difficult with the weather conditions. It was very hot and humid. But I’m just very happy » he concluded.

«  I had a good week even though I’m disappointed at the outcome » Foret said. «  I hit a very bad shot on hole 4 (double bogey) but I was able to remain focused until the end. I was looking at securing this second place because Andrea quickly made the difference on the front 9 as he shot 5 under. He had a great day » he continued. «  I hit a birdie on hole 17 which put me back in 2nd place. I can only be satisfied with this day during which I had to fight to keep this second place » he said. «  I’m satisfied with my week overall, I hit low scores, I putted very well and as a whole, it went very well » he concluded.

«  I’m very satisfied with my tournament » Victor Marchiset said. «  I followed my strategy from beginning to end today. I did not attack, I was not agressive and I putted very very well. I made 3 birdies in a row on holes 3,4 and 5. I’m just very satisfied. I would have signed up without any problem at the beginning of the day for a 4th place » he concluded.

Santiago Tarrio (ESP) still leads the Order of Merit, the Alps Tour official season ranking. With his 5th place today, Alexandre Daydou (FRA) moves up to second place of the Order. Louis Cohen Boyer (FRA), Marcus Mohr (ENG) and David Borda (ESP) complete the top 5 of the ranking. At the end of the season, the top 5 of the Order of Merit qualifies directly to play on the Challenge Tour.

Rising golf stars and staff of the Alps Tour will now take a summer break. The next tournament is the Cervino Open starting on August 29th.