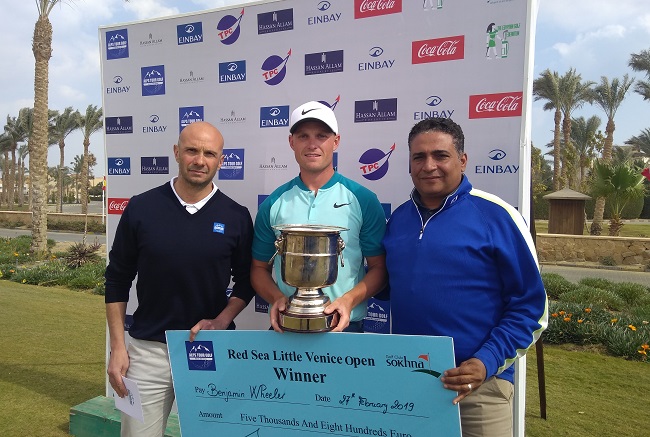 A par on the first playoff hole of the Red Sea Little Venice Open was enough for Englishman Ben Wheeler to finally catch the first title of his professional career, while Italians Enrico Di Nitto and Federico Maccario – leaders respectively after the first and the second rounds – both missed their second putts and had to settle for sharing second place on another quite windy day in Egypt.

The three talented players had finished their third round tied at -6 – with Di Nitto returning the best card, a 68 (-4) after a disappointing second round ; Maccario dropping one shot compared to the -7 he had on the previous day ; and Wheeler adding a 69 to the 68-73 he had on his records.

Maccario and Di Nitto have both already won Alps Tour events in the past, but on Sokhna GC course, at last, it was Ben Wheeler’s time: « It’s such a relief » he said, after holing a not-so-easy 3-ft putt, when his opponents had already missed from a slightly further distance for bogeys. « I had been close a few times, especially last year, so I was really waiting for this moment » he conceded,  « although I’m a bit surprised it happened in such windy conditions, usually I don’t like them at all ».

Ben, 26, from South London, had joined Alps Tour back in 2016 having finished 6th in the Qualifying School, and collected 7 more “top tens” since; in 2018 he ended in 12th position in the Order of Merit, playing 15 tournaments and totalling about 12.500 points. Now, after two tournaments he has already 6.500 points to his credit – more than a half than last year – and shares the leadership of the OoM with Frenchman Frederic Lacroix, winner of the first tournament of the 2019 Alps Tour schedule, the Ein Bay Open.

Experienced Argentinian Rafa Echenique had the best comeback with a round in 66 (-6), made of six birdies and one bogey in the front nine holes, followed by two more birdies and a bogey on the back nine, and shared fourth place with Englishman Jack Clarkson, at -5.

Next swing of the Egypt Winter Series will take place from March 25th to April 6th with three tournaments in a row played on three spectacular courses near Caire and the Pyramids, with a field of 132 players and a prize money of 40,000 euros each.