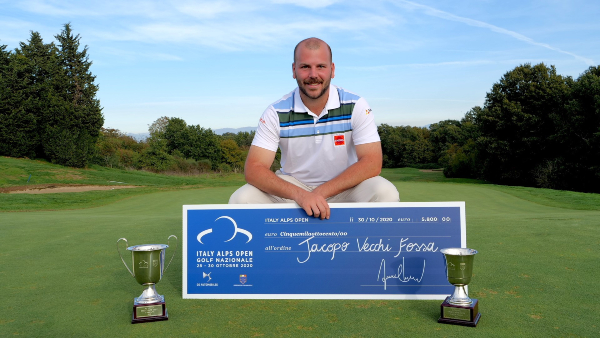 “It’s great to win the last tournament of the season. I’ve played six events this year and I’ve played well on some great courses. Plus, this win secures me my full card for the Alps Tour next season”.

Having undergone heart surgery in 2017, it is great to see him fully recovered and back on form. His pleasure at winning his first Alps Tour title was dimmed though by the fact that his playing partner, Jeong Weon Ko incurred a one stroke penalty on the 18th green.

On the 18th tee, Ko was one stroke ahead at -13. His ball came to rest just off the green and he marked it to check the line, but then moved the ball to adjust the line which is an infringement of rule 9.4b of the Rules of Golf. His error obviously unsettled him as he three-putted to finish with a double bogey whilst the Italian birdied to secure the win.

“It takes a little joy away from my win as I felt really sorry for Jeong”.

Nevertheless, Ko can take some comfort from his second place as it was enough to secure him third place on the Order of Merit and thus one of the three Challenge Tour places for next year.

The remaining two Challenge Tour places go to Jordi Garcia Del Moral from Spain, who was the winner of the 2020 OofM and his fellow countryman, Lucas Vacarisas who was second. Jordi Garcia Del Moral had arrived at the final secure in the knowledge that his performance this year with six top ten results, including a win at the Cervino Open meant that he would already have one of the three cards.

“I knew I had one of the top three places on the OofM but I had to aim for a top three win here, in case Lucas won the tournament”. He finally finished ninth which was more than enough as Lucas Vacarisas finished sixth.

Next week sees Jordi Garcia Del Moral heading home to Spain for a Challenge Tour event but he expressed his gratitude to the Alps Tour team.

“It’s been a long year, difficult with the Covid 19 but finally we finished the year. We did nine events, and all the players are very grateful to you guys for working so hard and doing a great job. So, thank you!”

The Alps Tour returns to Italy on the 11th November for the First Stage of the 2020 Qualifying School. The first two rounds will be played on three different courses near Rome over two days. The Golf Club Parco de’ Medici, the Terre dei Consoli Golf Club and the Golf Nazionale. These last two clubs will then host the Final Stage over three rounds the following week from the 17th-19th November.