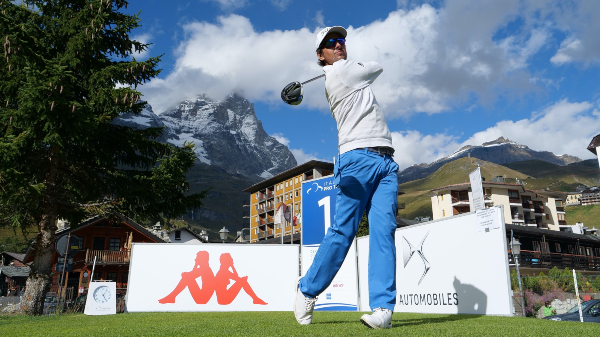 Jordi Garcia del Moral swinging his way to victory on Day 1 of the 2020 Cervino Open with the magnificent backdrop of the Matterhorn. Photo credit:Alessandro Bellicini/Italianprotour
2nd September 2020 | Alps Tour Golf

Breuil-Cervinia (Italy), September 2nd, 2020 – The opening round of the Cervino Open saw the Spanish player, Jordi Garcia del Moral top of the leader board with a -7 (61) for the day.

After his second-place finish two weeks ago at the Gösser Open, Jordi is obviously on form:

“My game today was perfect. I shot 5 under for 9 so I was thinking a little bit to try and do 5 or 6 under on the back nine .To be honest, I’m very happy I’m playing great golf right now so I just try to let it happen and we will see.”

In fact, after his 3 birdies and an eagle on the front nine, he carded two more birdies on the back nine.

In second position at -6 (62) is Marco Guerisoli from Italy who had 7 birdies and a bogey. Four of his birdies came on the back nine, including the last two, par four holes.

In joint fourth place at -5 (63), the Frenchman, Romain Guillon, entered the club house as leader after the morning rounds:

“It was a really good day. From the beginning I placed my tee shots well and then had lots of wedge and iron shots to hit the green, so I was pretty efficient even if have a couple of regrets about the two bogeys  but that’s golf, it happens.”

Alongside him is the American player Zeke Martinez. The Californian native is a long-time resident of Italy. Here by special invitation, he regularly plays at the Senior Italian Open, and today produced 6 birdies going out, 1 more coming in and 2 bogeys.

We have a group of five players sitting at -4 (64) including the Frenchman, Xavier Poncelet who was at the top of the board after his morning round:

“The round went pretty well with a great start. After that I had a few of difficulties on the greens as they have irregular speeds, and you can have some unfavourable bounces. So, I three-putted twice but recovered well to finish with 3 birdies in the last 5 holes, so I’m happy. “

He is joined by the two Italian players, Federico Livio who scored 5 birdies plus one bogey and Edoardo Giletta who had six birdies, five of which were on the front nine, but two bogeys saw him drop back coming in. The Austrian player Markus Habeler and the Spaniard, Javier Parada Puertas, complete the group. Both started from the tenth and both eagled the 17th hole par four. At the end of the round they had each done 1 eagle, 4 birdies and 1 double bogey.

The pack behind sees nine players at -3 (65) and seventeen players at -2 (66), so there will be everything to play for tomorrow in round two , heading for the cut. The forecast for Day 2 here at the Cervino Golf Club looks to be a little warmer than today with sunshine and some clouds.  Tee-off starts at 7:30 am from both the first and tenth tees.