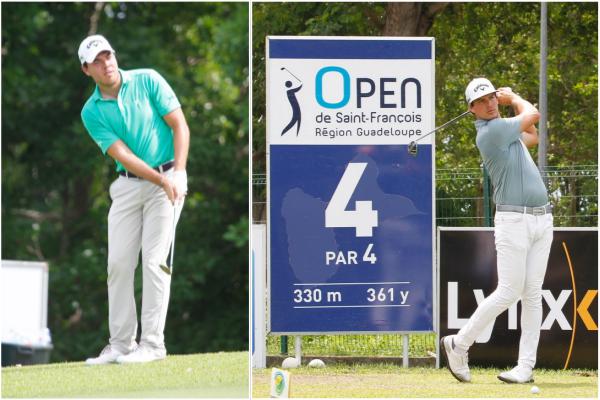 Lipparelli and Marelli on top after 2nd round in Guadeloupe

June 7th, 2019 – Saint-François (FWI) – The second round of the 9th Open de Saint-François – Région Guadeloupe is over, and the stage has changed a bit except for one name, Edoardo Lipparelli, who’s still keeping the top position having added a 68 to yesterday’s 66 ; at -8, the Italian is sharing now the lead with Argentinian Leandro Marelli, author of the best round of the day, 66 (-5).

The duo has just one stroke advantage over another Argentinian, experienced Rafa Echenique ; with two consistent rounds (68-67), the man from San Luis is standing solo on 3rd position at -7, and three more players share the 4th position at -6 : Frenchmen Maxime Radureau (who was 2nd last year in this tournament) and Xavier Poncelet, plus English amateur Jack Floydd, yesterday’s co-leader.

Rookie Lipparelli, 22, is confirming his great, consistent form (he’s 2nd in the season Order of Merit after having collected 3 second places in the first 9 tournaments of the year) and is in good position to finally claim his first, full title as a pro, after winning the French Qualifying School in March : « I’m very happy about the way I’ve played today, although I did not make as many putts as I wished ; the course was a bit more difficult as the wind picked up and the ground is getting drier, but it was a solid round. Tomorrow’s final round is certainly going to be challenging and I will need to be very careful ; I want to be focussed just as I was today, thinking shot by shot, and I’m sure it’s going to be fun ».

Marelli, 28, a regular on the Pga LatinoAmerica, is playing his 4th Alps Tour tournament, looking to climb the Order of Merit and get one of the spots available for the promotion to the European Challenge Tour : « I had the chance to finish well my round with three birdies on the last three holes (after 4 more birdies and 2 bogeys) ; lately I have been playing very solid and I feel I can play another good round tomorrow in order to finish high on the leaderboard, this is my main goal. I love playing the Alps Tour ! ».

Echenique, 38, is also a member of the Pga LatinoAmerica and is coming back to the Alps Tour after the first two tournaments of the year in Egypt (where he had a 4th place in the Red Sea Little Venice Open, last February), having had to stop for some weeks because of a back injury. « I’ve played very well both days, I was able to stay very patient and I feel I’m on the good track for a new chapter of my career in Europe ; now I just want to have a good round tomorrow ! ».

46 players (43 pros and 3 ams) made the cut at +3 (145) on beautiful Golf International de Saint-François, on the Eastern point of Guadeloupe island, in the French West Indies. The total prize money is 43,000 Euros, and the winner will get a cheque of 6,235 Euros.