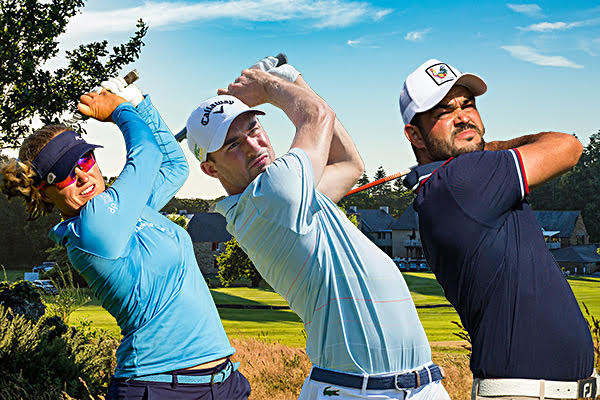 St. Malo (France), July 5, 2019 – Under another cloudless sky at the Saint Malo Mixed Open and with the Brittany sun beating down, Manon de Roey played a fantastic round today carding a -8 (64) for the day to give her a 3-point lead at -13 for 36 holes.

With a total of 8 birdies on her card including all four of the par fives, Manon de Roey explains:

“The conditions were perfect. There was not much wind this morning and it was still a little bit wet, but it was perfect. Today was very steady and I didn’t make any bogeys. I took advantage of the par fives again and birdied them all. I made a couple of long putts as well”.

Heading into the weekend, when asked what she hopes for over the next rounds and a potential win, Manon de Roey:

“The last two days were solid, so I just have to continue what I’m doing. It would mean a lot to win a tournament in general and this one is special because it is with the guys. There are two more days to go”.

At -10, second place is shared between the French players Frédéric Lacroix, one of yesterday’s joint leaders and Maxime Radureau who moves up one slot from third place the previous day.

Having birdied 6 of the holes today and despite bogeys on the par 3 fourth and the par 5 fifteenth giving Frédéric Lacroix a -4 (68) for the day, he remained optimistic:

“I felt pretty good about today and just had a couple of bogeys on the card. Conditions were maybe a little bit harder because of the wind and the course drying out a bit. I will try to win, obviously, but I don’t know how it’s going to go. It doesn’t matter if it’s a guy or a girl in front: I will try to catch her, or him and I will do my best to do that.”

“I’m very happy. I’m second for the time being. That’s cool. I’ll have to go into the weekend pretty hard.”

Having started with 3 birdies on the first three holes for a total of 5 birdies and an eagle on his card, he put the two bogeys down to an error of judgement in his wedge shots.

In third place at -9 sits a group of four players. The French player Teremoana Beaucousin who carded a 67 (-5) whilst James Sharp of England, Rafa Echenique of Argentina and Pierre Pineau of France all carded 66 (-6).

There are another 4 LETAS players in the top 20 on the leader board all sitting at –5 for the two rounds; Rachael Goodall and Cloe Frankish from England, Laura Murray from Scotland and Emilie Piquot from France.