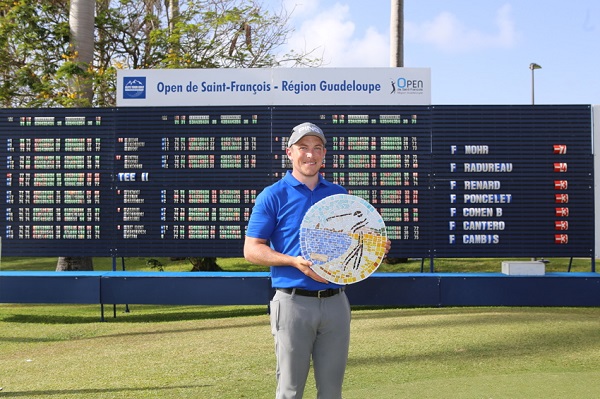 It was Mohr’s first professional victory.

«  I will remember this victory forever » 27-year-old native of Liverpool Marcus Mohr said. « I went trough so many emotions out there, it was a really good day all in all »  he added. « You have to embrace the heat and everything. Even if I had not won, I would have enjoyed my week because you learn so much by travelling, the people have been so kind here, the course was a new challenge to me as I never played a course like this before » he continued.

The final round’s turning point was when Mohr made an eagle on the 17 to seal the victory. «  I used a 3 iron. It was 228, into the wind, I knew it would go the right distance if I hit it right in the middle, it was just whether it would hold in the wind and fortunately, it did » he explained. «  It went pretty much where I was aiming and It was a relief to see it because I could not see it finish. Someone said it hit the pin. I was looking at the leaderboard, I always want to know where I am with the leaderboard, and Maxime Radureau was tied with me at 5 under. I was looking at pulling off probably one of the best shots I’ve ever had at the right time » he continued.

Mohr made an eagle, 4 birdies and 3 bogies in the final round.

«  Turning around and seeing my friends on the 18, knowing that I had done it, it was great » Mohr concluded.

During his thank you speech, Marcus Mohr thanked everyone involved in the tournament organization and particularly the greenkeepers as Mohr was one of them at the age of 15  working on a golf in England.

Saturday’s weather conditions were sunny and temperatures above 30°C.

The 9th edition of the Open Saint-François has already been confirmed for 2019.

Rising golf stars of the Alps Tour will now travel back to Europe for the Alps de Andalucia at La Monacilla Golf in Huelva, Spain, starting on June 14th.