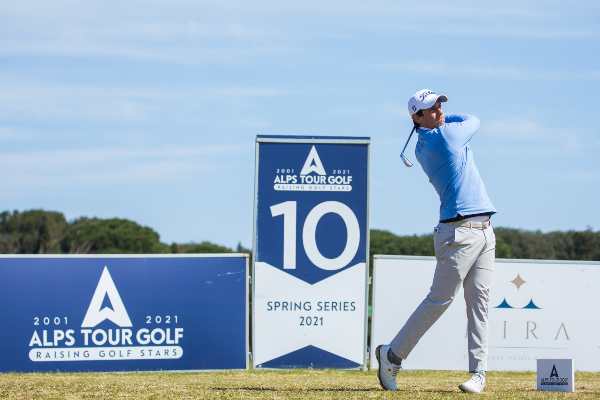 Matteo Manassero Makes His Move & Leads After Round 2 at Acaya

March 25th, 2021 – Lecce, Italy. Another stellar round from Matteo Manassero puts the Italian in the lead at 133 (-9) here at the Acaya Golf Resort. An extra birdie today and just one bogey saw him in the clubhouse with a -5 (66) for the second round. Reason enough for him to be satisfied as he says:

“Two really good days. Yesterday was the first round in competition after 5 months so there was a question mark, But I was very, very satisfied with what I saw, with the decisions, with the game, with a lot of things. My mindset was really good so starting like that it’s obviously easier and you just try to stay the same way and keep the same strategy and then hopefully the game follows. Luckily, today was another solid day and going into tomorrow I will just try to be the Matteo of the last two days and mentally try to copy and use the attitude I’ve been working on and that’s my main purpose and the rest we’ll see. But I’m really satisfied”.

In second place we have a trio of players at 137 (-5): the French amateur, Theo Brizard, who started the day at par, charged up the leader board to joint second. Despite a double and a single bogey on his card, his 8 birdies saw him card a -5 (66). He is joined by his compatriot, Edgar Catherine, an Alps Tour player since 2019, who fired a -4 (67) today with a total of six birdies and two bogeys to move up ten places. Rounding out the group is the Italian player, Jacopo Vecchi Fossa, who moved up two slots with his -3 (68) today after 6 birdies and two bogeys.

In fifth place, Ryan Lumsden from Scotland lost a bit of ground on yesterday’s third place with a -1(70) today after three bogeys, two birdies and an eagle whilst yesterday’s leader, Nicolas Platret from France dropped back to ninth place despite starting with a birdie. A double bogey, four bogeys and two more birdies gave him a +3 (74) at the end of the 36 holes.

The lowest score of the day went to the Spaniard, Alex Esmatges who carded a -6 (65) however, only 27 of the 120 players came in under par today which demonstrates the difficulty of the course, something which Matteo Manassero confirmed:

“The course is really tough. Yesterday, it was the toughest way to come back to competition after a while. It was blowing really hard, and this course doesn’t allow you to miss either right or left but my game was really solid both yesterday and today”.

The forecast for tomorrow is mainly sunny skies with light and variable winds.