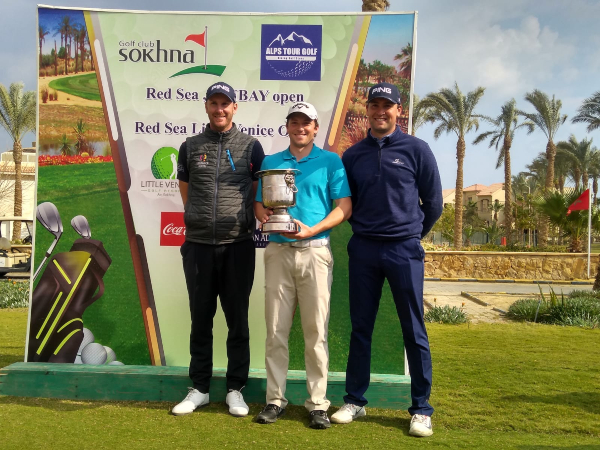 Suez (Egypt), February 25, 2020 – The final day of play here at Sokhna Golf Club proved to be a real humdinger with the players really battling it out right down to the line. Stefano Mazzoli, the rookie Italian player, finally walked away with the victory after a one-hole play-off finishing the 54 holes with a 201 (-15).

The three-man play-off was between Mazzoli, Jonathan Yates from Ireland and yesterday’s leader, Sam Robinson from England.

Yates was first into the clubhouse. With five birdies, two pars and two bogeys, he made the turn at -13. A fault-free back nine saw him hole a brace of birdies and seven pars to finish at -5 (67) for the day and 201 (-15) overall and move to the top of the leader board.

In the flight just behind him, Mazzoli teed off the day on -11. It was plain sailing for par until hole 4 when his ball found the water on the left. He carded a double bogey to drop to -9. His hattrick of birdies on the last three holes of the front nine saw him at -12 on the tenth tee. Another four birdies and a single bogey saw him finish at -4 (68) and tied at 201 (-15) to force a play-off with Yates.

But Sam Robinson had not had his last say and had yet to finish. Starting at -14, Robinson had a shaky start to the day with two pars and two bogeys on the first four holes. He settled down to finish the front nine with two birdies and three pars for a par 36. On the back nine he produced another single bogey, but two more birdies saw him finish at -1 (71) to total 201 (-15) and join the play off.

A fluffed shot by Yates put his ball behind the green almost toying with OB. Mazzoli chipped his ball to 3m of the hole for two on. Robinson’s recovery shot saw him finding the sand in one of the deep greenside bunkers.

Yates chipped on for three at 6 metres from the hole. Robinson’s bunker shot put him three on and 1m from the hole. Yate’s didn’t sink his fourth shot and it was given. Mazzoli lined up his putt, tapped the ball and holed out to win the trophy.

After his victory he expressed his satisfaction at this, his first professional win:

“I’m really happy with the result as it’s been a long journey. I only started playing pro in November last year. The day didn’t start as I had hoped with a double bogey on the fourth, so everything was all uphill from there. In the play-off, I took a chance and played my driver instead of an iron off the tee and it paid off.”.

The other most notable round of today was that of Giulio Castagnara from Italy. He had been leading at the end of round one but a disappointing second round had pushed him back to -7 at the start of play today. Today he performed a terrific remontada with eight birdies to finish in fourth place at 202 (-14). His sole bogey of the round on the last hole prevented us from having a four-way play-off!

At the end of today’s play, Sam Robinson moves to the top of the Order of Merit after his two consecutive second places of the season. Stefano Mazzoli’s win today puts him in second place just ahead of Lars Keunen, winner of the Ein Bay Open.

The Alps Tour returns to Egypt for the next tournament of the Winter Series, the Allegria Open from March 19th to 21st at the Allegria Golf Club on the outskirts of Cairo. Join us there for the next leg of the 2020 season.