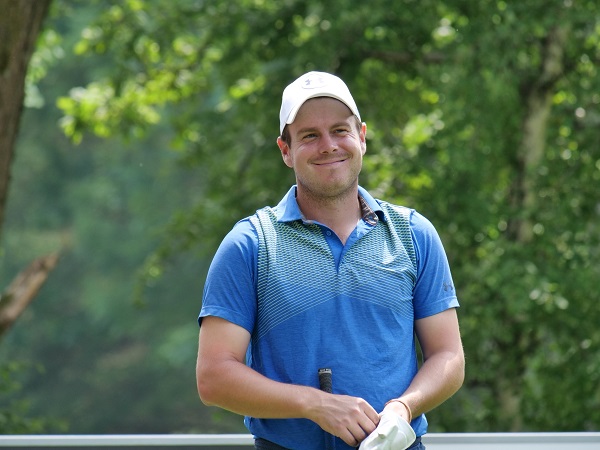 Metz (France), June 22nd, 2019 – With a repeat of the previous day’s -7(64) to finish at -14 for the two days, the Dutch player Lars Van Meijel takes a four-point lead going into the final day of the Open de Mirabelle d’Or in Metz, France.

There was no faltering today as Van Meijel carded 7 birdies and 11 pars for another 64 over the 18 holes. He had credited his result yesterday to his strong driving and today was a repeat performance with him missing only one fairway. Having made all the greens in regulation he demonstrated a keen eye on the greens as well. Van Meijel said “I was happy with my putting today as well. I putted well”. His impression was that from tee to green he had played even better than the day before.

Yesterday’s joint leader, French player Franck Medale had teed off in the morning and was the morning leader coming off the 18th with a -3 (68) for the day to give him a -10 overall. However, the tight pin positions today posed some problems for him: Medale “The flags were a little bit more in the corners and I made a few club choice errors approaching the green which cost me a few bogeys.” Overall, he left the course confident that his second place -10 leaves him in a good position for the final round where he aims to “be patient, play it hole by hole and wait for the birdies to fall.”

Right behind Medale was the Italian Michele Ortolani, who soared up the leader board today moving from joint 19th to third place with a great round of -7 (64) including 8 birdies to leave him at -9 for the 36 holes. An experienced Alps Tour player, Ortolani has had three top ten finishes but has yet to taste victory.

And hard on his heels are the two French rookies Pierre Pineau and Nicolas Platret both on -8 for overall joint fourth place. Pineau continued to play consistently with a -4 (67) as he did yesterday whilst Platret improved his result today by two strokes, carding a -5 (66).

The three players in joint 6th place,coming in at -7, are Frenchman Teremoana Beaucousin and Austrian Markus Habeler who both played -4 (67) today. They’re joined by Habeler’s compatriot Timon Baltl who carded an impressive -6 (65) for the day.

The cut was at -2 (140) for the 36 holes so 42 professionals and 2 amateurs will head out for what looks like being a closely contended final day of the Open de la Mirabelle d’Or.