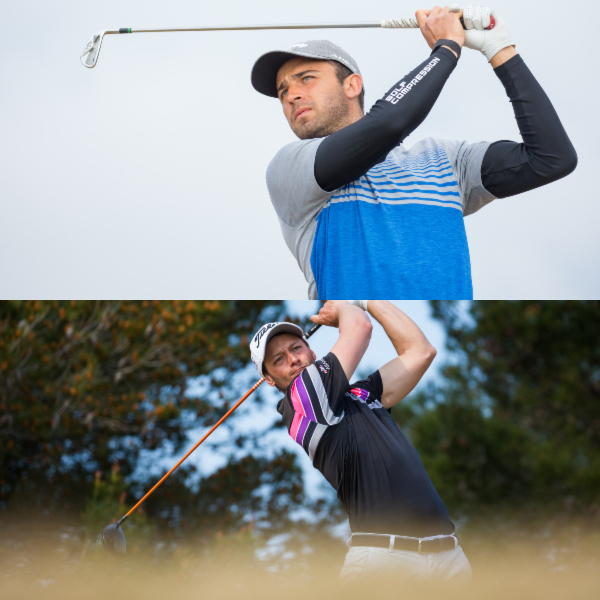 April 28th, 2021 – Perugia, Italy. After battling the climatic odds and a challenging course, a Spanish-Italian duo, Joel Moscatel and Stefano Pitoni head the leader board on -5 (66) after the first round of the Antognolla Alps Open.

Leader after the morning rounds was Joel Moscatel from Spain with a three-stroke lead at this point:

“I played great today. It was tough at the beginning because of the weather with the rain plus it’s a tricky course. The greens are really difficult. You need to put the ball in the right spot every time. On the front nine I made the first bogey then I started making putts. My wedges were really good today, so I started making birdies. Then on the second nine I didn’t make that many birdies, but I can’t complain because I played them super well so I’m happy”.

Starting from the 10th, the Spanish amateur’s only bogey came on the uphill par 4 14th quickly followed by 4 birdies in a row then 2 more birdies on the back nine.

Stefano Pitoni, an experienced Alps Tour player having won three tournaments in 2016, headed out in the afternoon also from the 10th. He said that the key to his game today was his excellent short game, especially his putting as he sank some long ones. The 7 birdies on his card bear witness, but 2 bogeys on the home nine held him back from the overall lead. He too confirmed that the Antognolla Golf course is very physically demanding and that the rain made the fairway shots particularly difficult.

In third place is Jack Floyd on -3 (68). The Englishman teed off from the 1st in the afternoon and had an unfortunate double bogey on the par 3 3rd caught by the large greenside bunker. However, he got back into gear immediately with a birdie, par and 4 birdies to finish the front nine on 33 (-3). He continued with 2 more birdies coming home but he too saw 2 bogeys snatch a joint lead away.

We then have quite a traffic jam at -2 (69) with a group of 14 players including Jacopo Vecchi Fossa, winner of last week’s Abruzzo Alps Open and Ryan Lumsden, winner of the MIRA Golf Experience Acaya Open last month. Alps Tour tournament winners and former European Tour players, Matteo Manassero and Edouard Espana are there aswell. Two more former champs from Italy, Luca Cianchetti and Andrea Saracino are sitting pretty too. Tom Vaillant the French amateur who had an excellent fourth place finish at the weekend continues to hold his own against the pros.

The difficult playing conditions are supported by the statistics with only 28 players coming in under par, 8 players on par and just 5 eagles out there today. Things do not look set to improve drastically with more rain forecast overnight and tomorrow. The players are going to need resilience and focus to make their mark when they tee off at 7:30am.