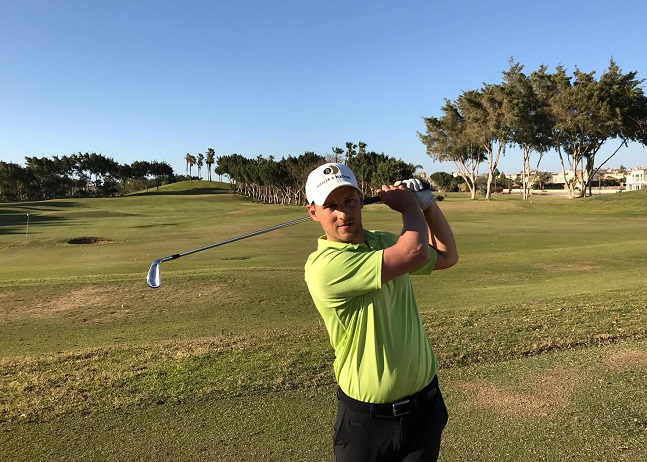 Nemecz back to old form, leads by three

A familiar name is sitting on top of the leaderboard, after the second round of the Dreamland Pyramids Open hosted by Dreamland Golf Club, in Cairo. Austrian Lukas Nemecz, 29, is doing very well in Egypt and on the tour where his career started, in 2013: he has added a spotless 66 (-6, with four birdies and one eagle) to the 68 he scored yesterday and, with a total of -10, has a comfortable three-strokes advantage over Englishman James Sharp, 27, winner of Cervino Open in 2017, and Argentinian Leandro Marelli, 27, member of the PGA Tour LatinoAmerica and looking for some experience in our Continent.

Nemecz has spent the last few years on the European and Challenge Tours with some mixed results, and is motivated to climb the Alps Tour ranking again to go back to the « First Division » having accumulated more experience: in the First Swing of the Winter Series last February, in Sokhna, he already recorded a 7th and a 6th place, so the premises are all there.

“It was a perfect day, really”, said Nemecz, who lives in Graz and is attached to Murhof Golf Club, “no bogeys and a nice eagle on hole n. 2 (his 11th), a par 5. I was probably helped by playing in the morning, with less wind. I already knew this course – and I like it! – because I had played this tournament back in 2015, when I had a top-ten finish”.

The cut fell on level par, leaving 43 players in contention (three amateurs among them) and fighting for the 40,000 euros prize money at stake.

DREAMLAND PYRAMIDS OPEN, 25-27 March
The Dreamland Golf Course is a world class facility located just a few minutes away from the Great Pyramids. The layout of the course was designed by the world renowned architect, Karl Litten and in 2010 the course was redesigned by popular Irish architect David Jones. At present it consists of 36 beautifully manicured challenging holes. The Championship Course in total measures an impressive 7,205 yards that can be played from five sets of tees, as well as a floodlit driving range. http://dreamlandgolf.com/