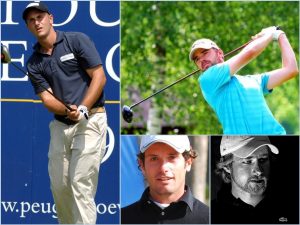 And then came a time when the Alps Tour started to become more and more international, and it was no longer a match between Italians and French players, as representatives from England, Scotland and Northern Ireland were climbing the steps up to the top of the leader boards – and the rankings. In the year […]

In their words: 2005-2008 ranking winners, when France was ruling the Alps Tour

In their words: the winners of the Alps Tour rankings share their memories

The Alps Tour is turning 20 years old: as old, as young, as some of our members. Its story is strictly connected to those of the 20 remarkable players who have won the Order of Merit, year after year. That’s why we thought that one of the best ways to celebrate our 20th anniversary is […]

It was the year 2001 when the Golf Federations of France, Switzerland, Italy, and Austria first launched a new professional tour. They called it, appropriately, Alps Tour – from the mountain range that stretches across those four countries, from west to east – and its purpose was clearly established since the very beginning: to provide […]

November 19th, 2020 – Rome, Italy – A tightly fought final round saw three winners of the Final Round of the Alps Tour Qualifying School 2020; Blaire McKeithen from the USA, Philip Bootsma from the Netherlands, and the French amateur, David Ravetto with -7 (209) for the three rounds. The Frenchman was first into the […]

November 18th, 2020 – Rome, Italy – With the best score of the day on both courses, a resounding 65 (-7), Will Heffernan from Australia took the lead with an overall -9 (135) after 36 holes. Teeing off on the Terre dei Consoli Golf Club course from the first, the player from Down Under started […]

Qualifying School 2020 Final – Simon Bryan Leads After Round One

November 17th, 2020 – Rome, Italy – Blustery conditions made play difficult today but after the first eighteen holes, the Irishman, Simon Bryan is in the lead by one stroke from his nearest contender at -3 (69). The 28-year old player from Druids Heath Golf Club in County Wicklow is not unfamiliar with such meteorological […]