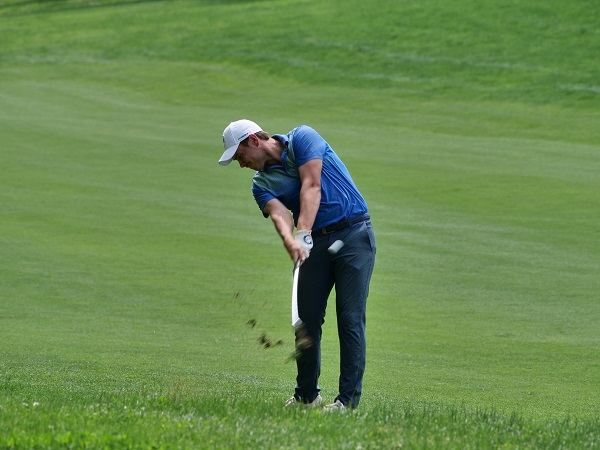 Open de la Mirabelle d’Or, Van Meijel and Medale lead the field at the end of 1st Round

Metz (France), June 21st 2019 – The Dutch player Lars Van Meijel and the French player Franck Medale both carded a -7 (64) for the first round of the Open de Mirabelle d’Or to be on top of the leader board of the 136 players competing in Metz, France.

Meijel teed off in the morning and moved into the lead with 3 birdies and an eagle on the front nine. He continued his solid performance on the back nine with another birdie and an eagle. He put his strong showing down to his driver above all: Meijel ”I hit my driver straight and long to give me short iron shots on the approaches to the par fives”. Indeed, his tally for the three par 5s on the course was birdie, par, eagle.

But as Meijel was nearing the end of his round, Medale teed off in the early afternoon and gradually ate away the Dutchman’s advantage. Medale’s approach was to concentrate on constructing his game with good tee shots: Medale “My objective was to start each hole well to allow me to be aggressive but constructive and create birdie opportunities.” An approach that worked as with seven birdies, three of which were also on the par fives, he turned in mirror nines with a 32 both out and in.

Van Meijel, 25, is an experienced Alps Tour player having had one victory in the 2017 Red Sea Little Venice Open and 9 top ten finishes, and having played one season (2018) on the Challenge Tour. Franck, 23, is still hoping for his first illusive victory on his second year as a professional.

Both players were happy about the condition of the course, Golf Club de la Grange-aux-Ormes, although the rough proved to be quite tough making spin control difficult.

Play resumes tomorrow at 7:45 am with the leaders’ tee-times reversed. An early start for Medale and an afternoon tee-off for Meijel.