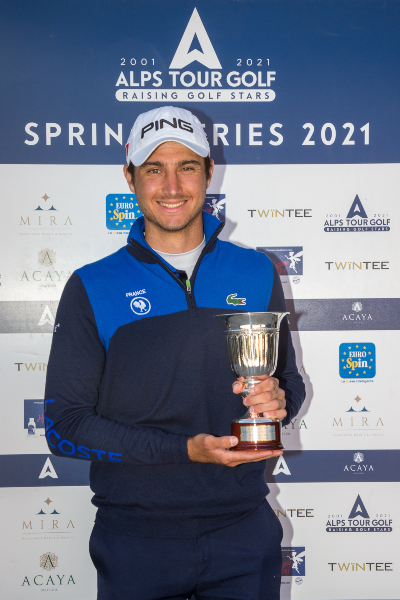 March 30th, 2021 – Lecce, Italy. Yet another suspense-filled finish for the final round of the second tournament of the Alps Tour 2021 Spring Season here at the Acaya Golf Resort where the young French amateur, Paul Margolis edged out Matteo Manassero to win the tournament by one shot at 201 (-12).

Teeing off in the flight ahead of the leader, Margolis had a rock-solid front nine with not a bogey in sight and four birdies to leave the 9th green -11. Behind him yesterday’s leader, Manassero, teed off at the 9th level with the French player. However, a birdie saw him turning for home at -12. Yesterday’s runner-up, Angel Hidalgo Portillo saw the leaders pulling away from him after carding a double-bogey, bogey, and birdie to move back to -6.

Margolis continued his bogey-free run on the back nine with 3 pars and two birdies to be sitting -13 on the 14th. In his rear-view mirror, was Manassero who finished the 14th hole at -12 after one birdie and a bogey. Four holes to go and everything to play for.

Bogey, par, birdie for Margolis to head for the 18th at -13. Bogey, birdie, bogey for Manassero to leave him trailing at -11 on the last hole. Margolis missed his putt to finish with a bogey and headed into the clubhouse at 201 (-12). Everything depended now on Manassero as he had birdied the 18th in the last two rounds in which case, he would have forced a play-off. Unfortunately, today he was not third time lucky and left the green with a par to hand the victory to Margolis.

A fantastic result for the amateur player from the Terre Blanche Golf Resort who just last spring decided to stop his university studies in the USA to devote himself 100% to golf. Currently pre-selected for the French team for next year’s International Amateur Team Championship to be held in France. The MIRA Live the Soul Open is his first professional competition win. When asked how he felt:

” I don’t think it’s sunk in fully yet. It’s hard to take in. I’ve just spent three fantastic weeks here  at the Acaya Golf Resort and this last week was particularly emotional. It’s difficult to realise that on just my third  start on the Alps Tour I get a win”.

Was he aware of what Matteo Manassero was doing in the flight behind him?

“Not at all. I told myself last night that I had a job to do out here today and that was to hit the best shots I could. I didn’t look at the leaderboard at all and just stayed focussed on my game “.

What are his plans for the future?

” This result may change things a bit. I had planned to play the Alps Tour as an amateur but I think now I may throw myself into it whole-heartedly. I do have a project with the French Golf Federation to play in the International Team Championship next year so I just need to take the time to reorganise my schedule”.

In third place is another amateur, the Italian Gregorio De Leo on 205 (-8) who was the winner of the Italian International Men’s Amateur Championship at the beginning of March.

In fourth place is Angel Hidalgo Portillo from Spain 206 (-7). That keeps him at fourth position on the Order of Merit. Despite having just missed out on victory today, Matteo Manassero now heads the Alps Tour OofM after two tournaments.

The Alps Tour remains in Italy for the month of April with the next stop for the players being the Abruzzo Alps Open at the Miglianico Golf & Country Club in Pescara from 22nd – 24th April 2021.