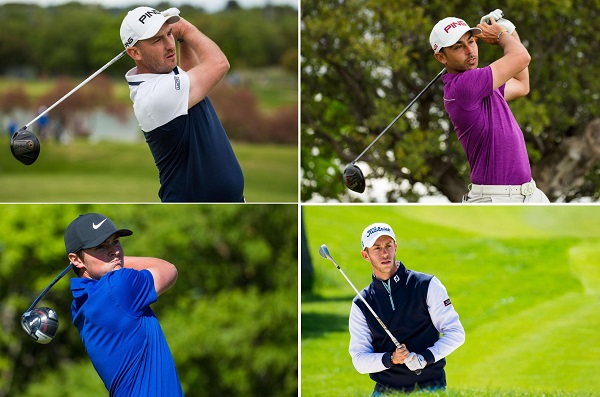 Perfect day to score low at Valdeluz, four share the lead at -10

Contenders of the Alps de Las Castillas in Spain took advantage of the perfect weather conditions to go low in the first round at Golf de Valdeluz (Guadalajara). Chill and strong winds experienced yesterday during the Pro-Am (won by the team of Italian Luca Cianchetti) gave way today to sunshine and milder temperatures, more appropriate in this season and in this part of the world, and 117 players scored under par (out of 144).

The course, situated some 60 km North-East of Madrid, showed some kindness to most of the players, leaving them plenty of birdie chances – statistics report a total of 843 birdies and 53 eagles on 18 holes – with only few bogeys (299) to stain their cards. On top of the leaderboard seat four players: a duo of young French rookies, Pierre Pineau, 19 years old from Paris La Boulie and Edgar Catherine, 20, from Aix-en-Provence, who returned two very similar bogey-free scores, both with eagle on hole 11 (a par 5) and eight birdies; Order of Merit leader, Spaniard Sebastian Garcia Rodriguez, 30, with one eagle (hole 14), one bogey (hole 17) and 9 birdies; and experienced Frenchman Xavier Poncelet, 33, from Bordeaux, who finished his front nine with an eagle-2 at hole 18 and totalled eight birdies, five of them in a row towards the end of his round, from hole 4 to 8.

« It was pretty good round – sayd Pineau, who has played 4 out of 6 tournaments in-money with 2 top-tens – my long game was not great today but chipping and putting was very solid. I made a good eagle on 11 holing a 5 metres putt, and a 20 mt putt on 17 for birdie brought me to minus 9, giving me the sprint to finish with another birdie on 18. Tomorrow’s strategy will be the same as today, hit as many drivers as I can trying to repeat the same solid short game ».

« I didn’t have to make really long putts today – said Edgar, number 35 in the Order of Merit after six tournaments – the longest were from 5 metres at hole 6 and 10 metres for par at 16, otherwise I was generally pretty close to the hole. My eagle came after a super drive, 136 mt to the flag, I hit my wedge at 1.5 metres and made the putt. All my game was pretty regular and tuned today, during my practice rounds I realized that the course could give good chances to score low – which is always good fun in tournaments! – and I thought that I should try and be among those who would go a lot under par… which I did, so I’m happy I’ve reached this first goal ».

« I’ve played very well and solid the whole day – said Garcia Rodriguez, who won three weeks ago in Italy and was second in a Challenge Tour event in Spain, last week – the course is in good conditions and I could hit the ball the way I wanted. It’s obviously a favourable moment for me, I’m trying to accumulate as many points as I can in order to keep the top positions in the Order of Merit and have an easier second part of the season for grabbing one of the card for the Challenge Tour ».

« Today? It was obviously very good!! – loughed Poncelet, who debuted in the Alps Tour in 2009 – my driving above all, but everything worked really well, I’ve hit 18 greens in regulation or better. Tomorrow I think it will depend much on the wind, today in the afternoon it picked up quite a lot – I haven’t played this course with no wind yet, so we will see. This year I didn’t start the season at my best, I think I was still suffering from the final place of last season – one outside those admitted to the Challenge Tour – so I’ve changed a couple of things during the winter, and now all the pieces are finally coming together ».