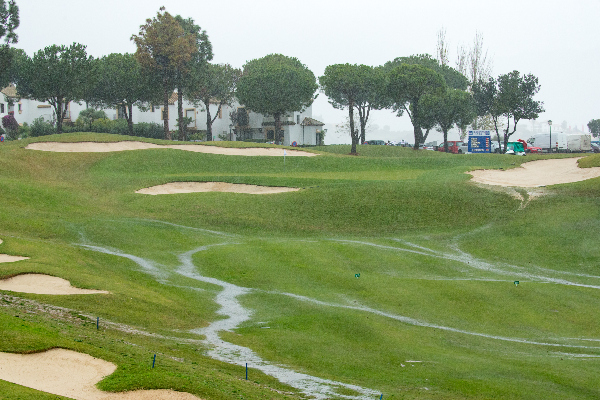 Malaga (Spain), December 20, 2019 – After a night of non-stop rain, the downpour let up to allow play to tee off as planned at 9:15 for Round 2 of the Final Stage of the Alps Tour 2019 Qualifying School here at La Cala Resort. However, it was a short respite as the heavens opened again at 11:00 and play was suspended.

Players had to cool their heels until play resumed at 14:45 with a light but steady rain making for less than favourable conditions. The rain gradually increased in intensity until at 16:05 after just over an hour of play, the decision was made to suspend the game due to the water-logged conditions.

The old maxim of ‘the rain in Spain stays mainly in the plain’ seemed a bit of a misnomer as over 30mm of rain have fallen in the past 18 hours in this coastal region of Malaga.

Play will resume tomorrow morning at 9:00 with the weather promising overcast skies and some light showers.

Should the weather hold, the players will terminate Round 2 with the different flights having between 8 and 16 holes to finish to complete the 36 holes when the cut of the leading 65 players and those players tied on the final qualifying place score will be made.